Although cinema existed early in Palestine, it was not able to be turned into a socio-cultural phenomenon. Furthermore in Bethlehem, the cinema theater was demolished and turned into a building of investments and commercial projects— one famous example is Al Amal Cinema. In 2021, Bethlehem was classified as “The capital of Arab culture.” What is more astonishing is that Dar Al Kalima University is the only university that teaches cinema, and conveniently located near the project site.

The project represents a series of “cinematic spaces” in Bethlehem city in Palestine, aiming to enrich the cinematic culture and mirror the Palestinian stories of marginalized areas audio-visually. Empowering a new generation of pioneers, YouTubers, influencers, and Local filmmakers to show and tell their experiences to local and global audiences.

The design represents a series of "cinematic spaces" that connect the Dheisheh refugee camp to downtown Bethlehem, Palestine. Aiming to enrich the cinematic culture and mirror the Palestinian stories of marginalized areas audio-visually. Empowering a new generation of pioneers, YouTubers, influencers, and local filmmakers to share their experiences to local and global audiences.

Platforms as a solution, The architectural concept is based on horizontal platforms that express cinematic spaces and are inspired by Dheisheh camp residents' social use. Vertical Platforms that reflect the outdoors and screen cinema towards the People's Flow. These spaces are divided into 3 main functions:

1) Social Cinema — Mobile Film: To ensure the project's independence from any agenda. The community, in general, was involved with interactive exhibition spaces, including an open-air cinema, and a "Mobile Film" to attract pioneers and spread the culture of cinema in marginalized areas. An external exhibition showcasing the history of Palestinian cinema and public squares that accommodate the Camp Film Festival or the Schools Film Festival, for example, where the films of the people they have produced are shown.

2) Social Film Production —Film Lab: It aims to help people make their film production. It has more than one level of users, pioneers, YouTubers, influencers and local filmmakers. They form an integrated and continuous cycle in enriching each other's experiences. Pioneers can contribute by acting and directing, an idea, writing a coherent script, using people's voices in animation, dubbing, borrowing tools and shooting equipment. Uploading video clips filmed on smartphones and sent to an editor and audio and video producer. These digital stories, will be promoted via social media by influencers in exchange for providing them with architectural spaces such as the use of outdoor studio, a theatre to speak through, a lecture hall for discussion, and capacity-building workshops on the subject of film production.

3) Cinematheque _ Film Library: is a digital library of archive films and film- related objects with the venue of the exhibition, and is responsible for preserving the general cinematic heritage. It includes the cinematic works of all Palestinians from Occupied Palestine in 1948, Diaspora, West Bank and Gaza. Film Library works on digitization and certain processing with international standards.

Resource and environmental performance: The Bethlehem area is known for its excellent stone production, and concrete was used symbolically. To encourage local production in this manner. Special consideration was given to environmental sustainability. Make courtyards for natural ventilation in the building. On the southern facades, movable solar panels. Orientation of the building's largest side to the south in order to maximize the area of solar cells. The roof serves as a passive cooling system, as well as mechanical ventilation and natural lighting in the film lab via Skylight.

The Vis-à-Vis Parallel Project connects the Dheisheh refugee camp to downtown Bethlehem, providing locals with breathing space in urban areas. Architectural introversion of most nearby buildings, which are fenced by walls and small gates. Unlike the camp's architecture, the street space is completely open. The treatment was intended to achieve balance by freeing the center side from closure by creating open yards towards it with no restrictions. And giving the camp side privacy by planting green elements inspired by the nostalgic Palestinian landscape. 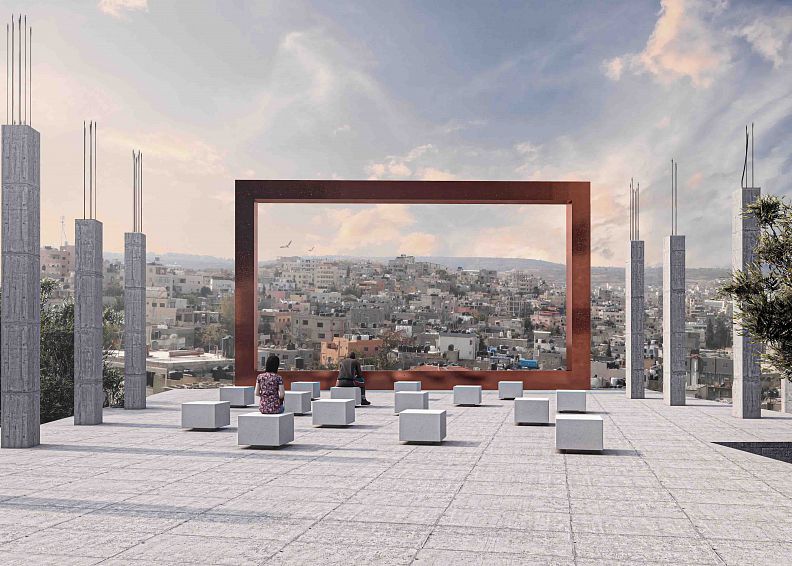 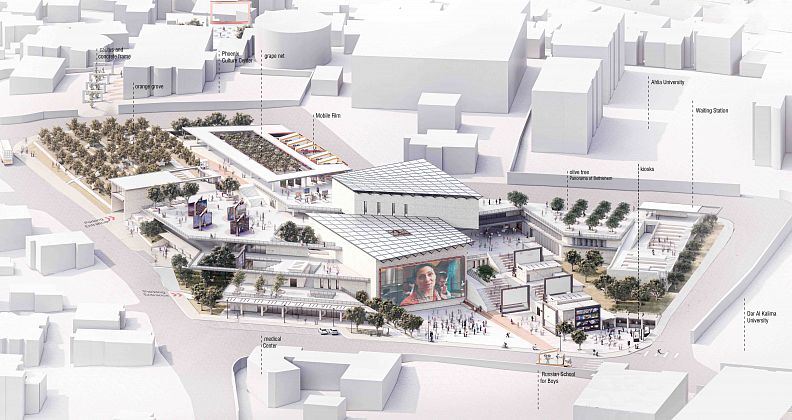 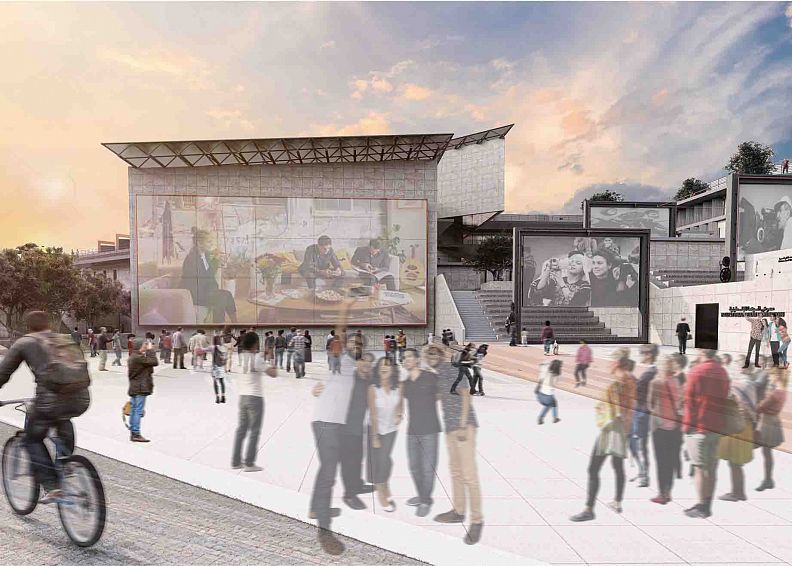 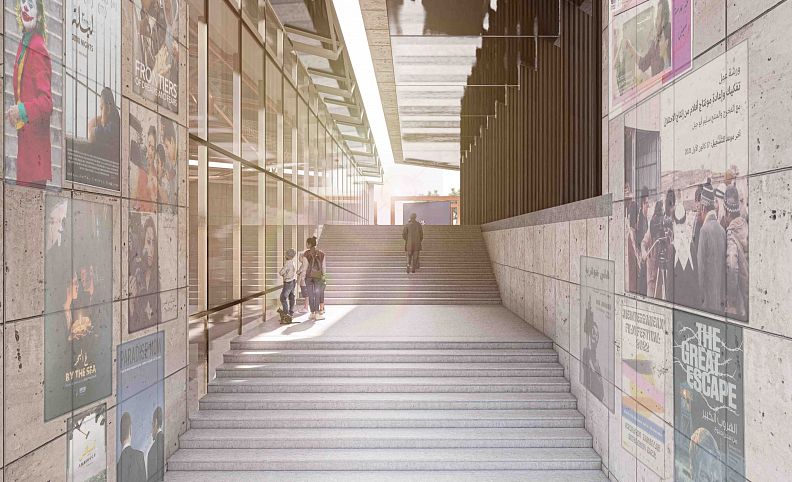 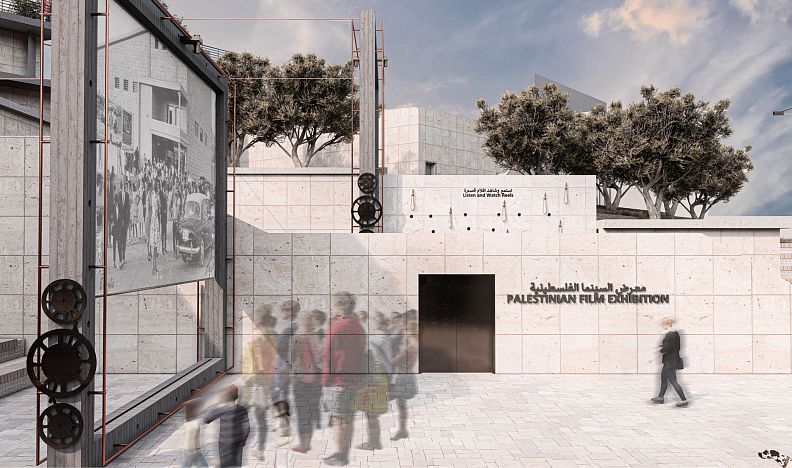 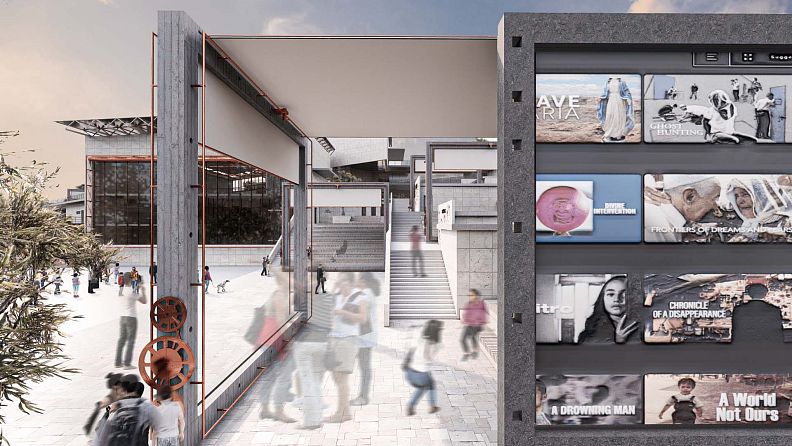 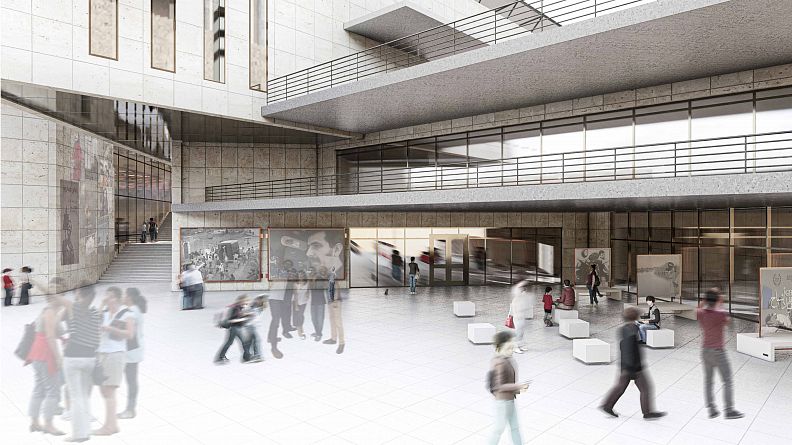 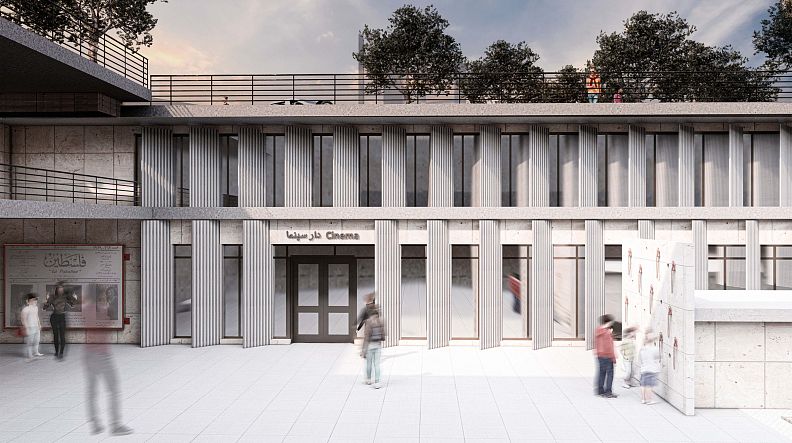 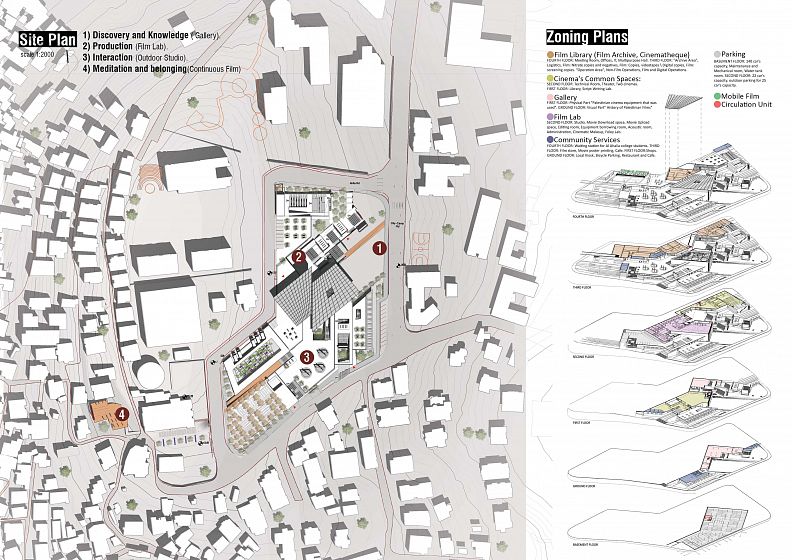 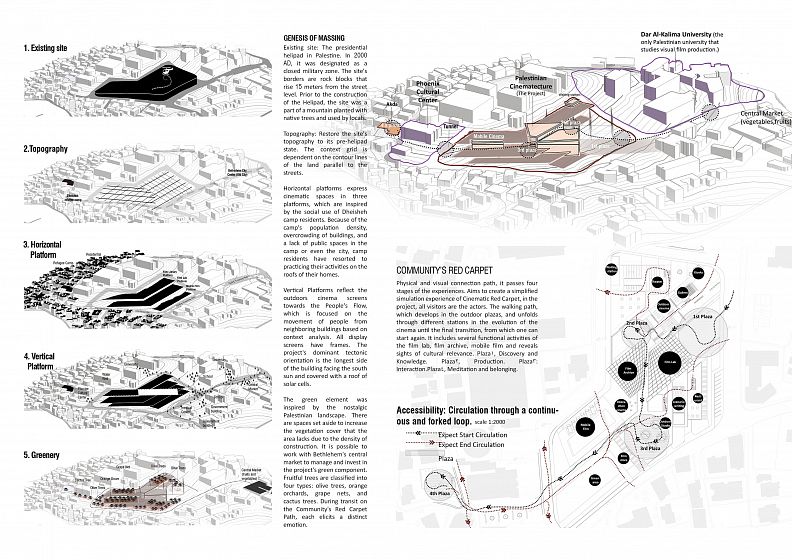 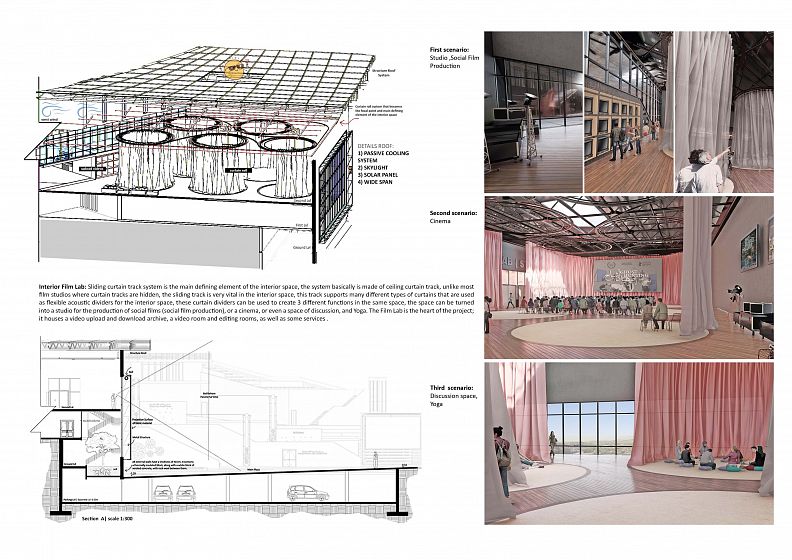 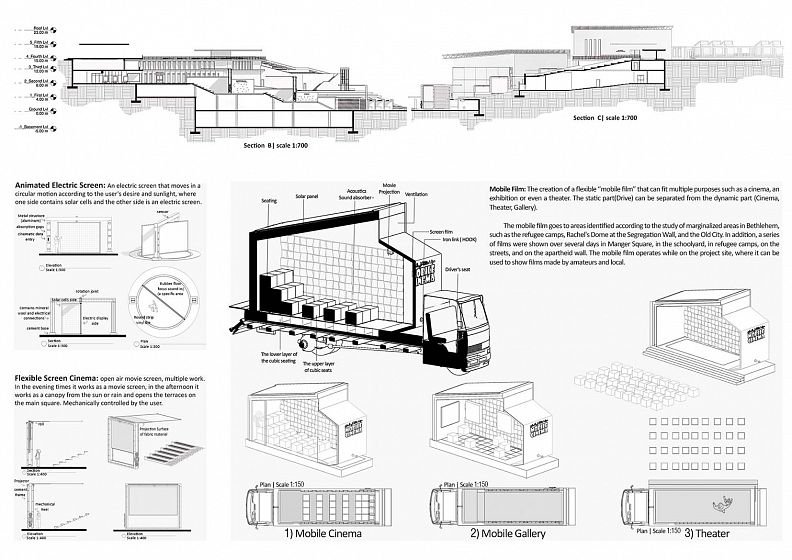 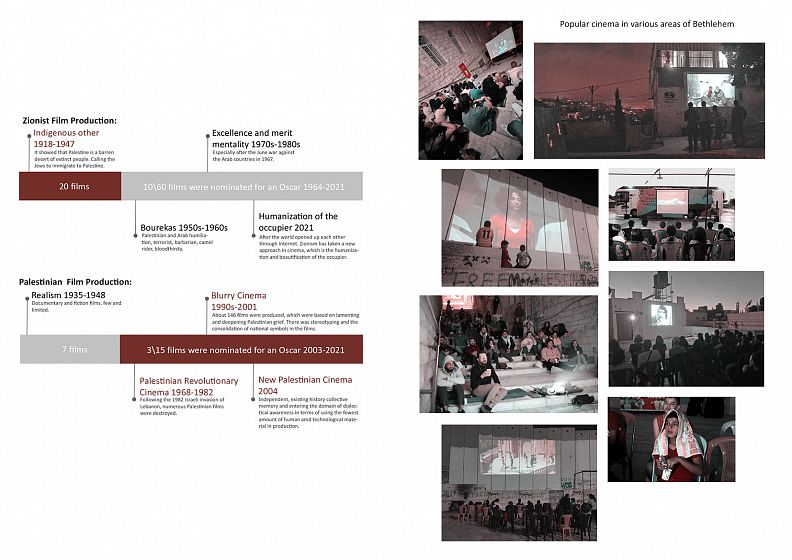 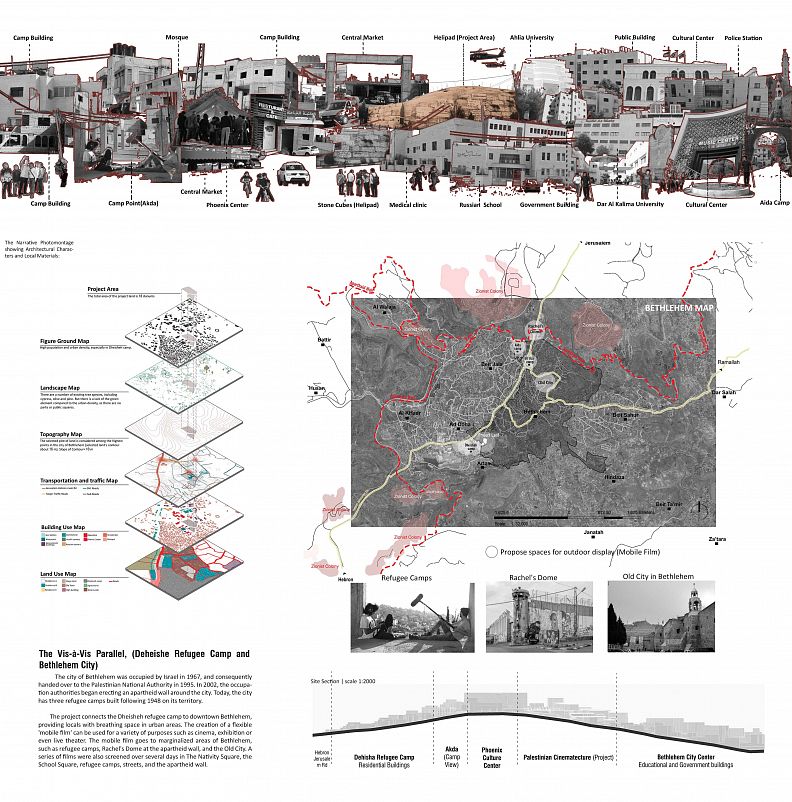 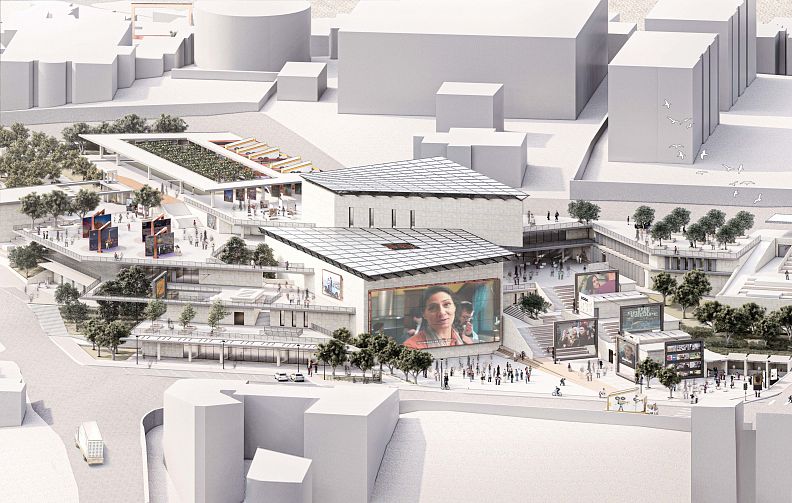 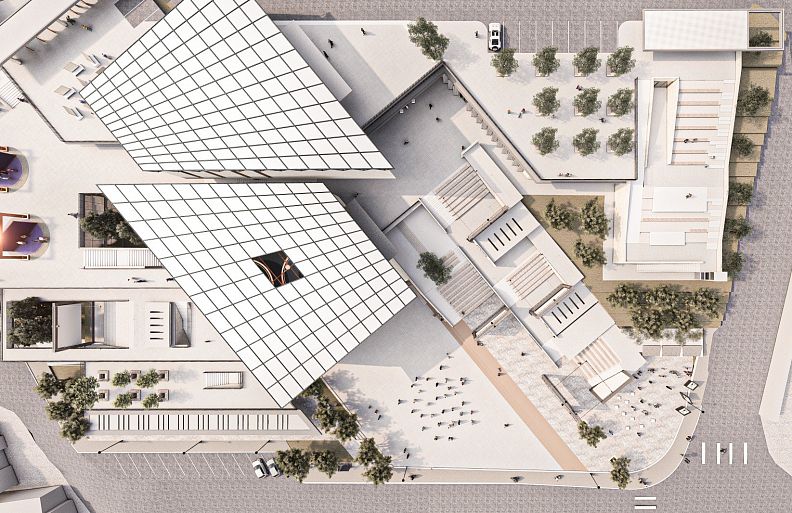