The Royal Docks in London are one of the most fascinating waterfront areas in the world. Despite this, an area in Silvertown has been left abandoned since WW2. The historical heritage makes it a perfect place to create a new civic centre capable of merging the past and moving towards the future. The new civic centre aims not only to redevelop the abandoned area but also to create a living room for the community. Through a museum and workshops, it aims to educate people about the past and allow new generations to learn new skills for their work as well as their everyday life. The urban context is taken into account to continue the discussion of connectivity already initiated by the Thames Barrier Park creating a more fluid and continuous experience of the city.
The materials and technological choices have been made in line with the sustainability requirements of recent years, so as to create a piece of architecture that can rely on itself and the environment before anything else.

The study of the urban context identified urban axes from which to begin to explore and inform the design of the civic centre. Two opposing triangles collide with each other in the site area, recalling two ships coming from the two bodies of water.
The clash of these ships generates a space where tension is at the heart of the design. Otherwise static geometric forms intersect each other simulating interpenetration.
The ground floor is an open space shared by the two ships, where people can meet and watch the exhibition space. The underground floor contains the historical museum, a space that secretly connects the two ships and creates a circulation loop back to the ground floor. The first floor, accessible via a ramp spiraling around the exhibition space, leads to the workshops. The hands-on workshop is located on the ship to the right and the digital workshop on the ship to the left.
Outside, the ship from the park has merged with the landscape, thus creating an accessible green terraced roof where you can admire the surroundings. On the other hand, the ship coming from the Royal Docks has a covered amphitheater facing the water with the aim of displaying the activities on the docks like a stage.

The materiality of the proposal took into account the material historically used in the ships industry: timber.

The structure is made of CLT walls and LVL beams for the grided roof which spreads the load equally to the two ships reinforcing the idea of a collision between the two now acting as one entity.

The underground floor is entirely made out of polished concrete that helps to reflect the light from above, especially where a glass ceiling with a pool provides caustic water reflections on the floor below.

Because the left ship is closer to the high residential buildings, the digital workshops have been located there to exploit the colder side of the proposal due to the shadows cast on it. While the right side makes use of the sun exposure to put a solar panel on the metal roof to store energy. 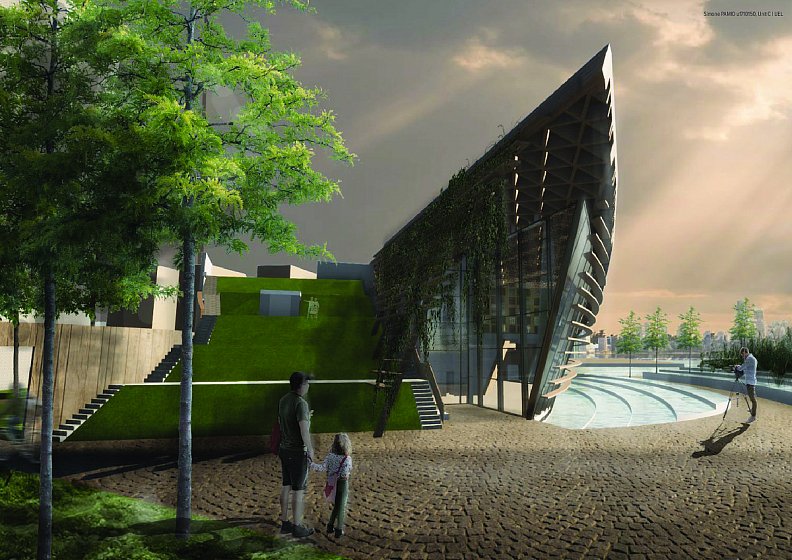 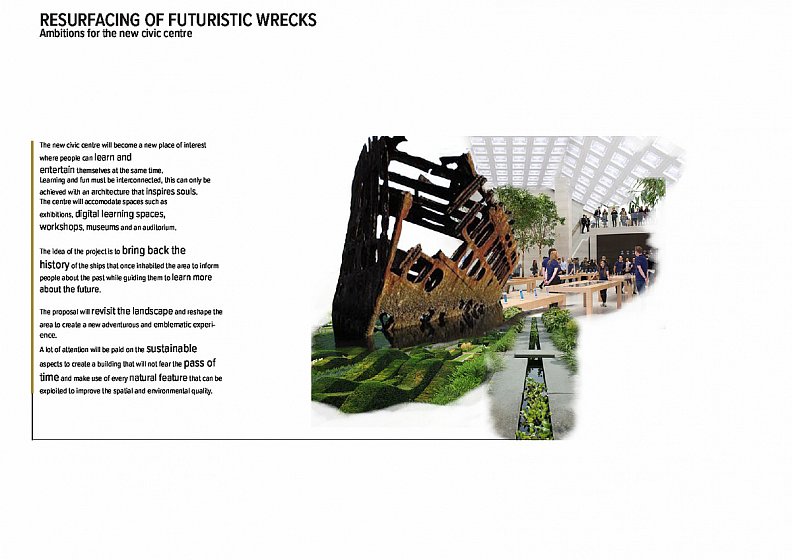 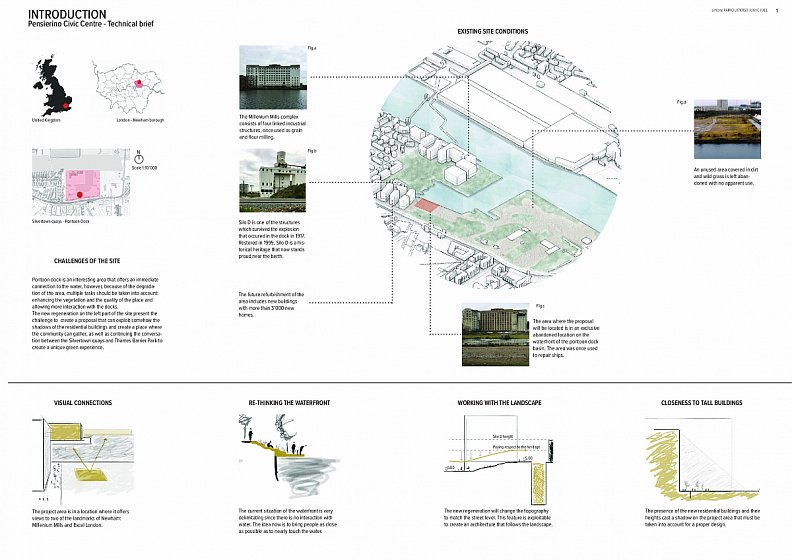 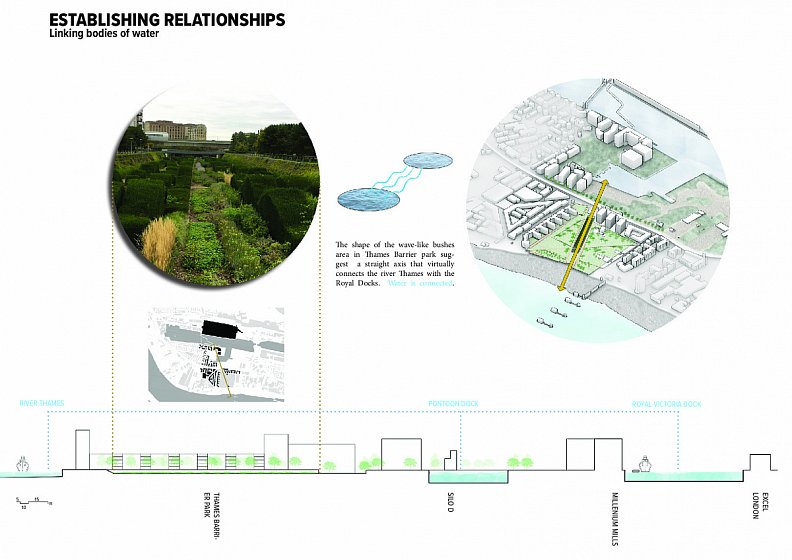 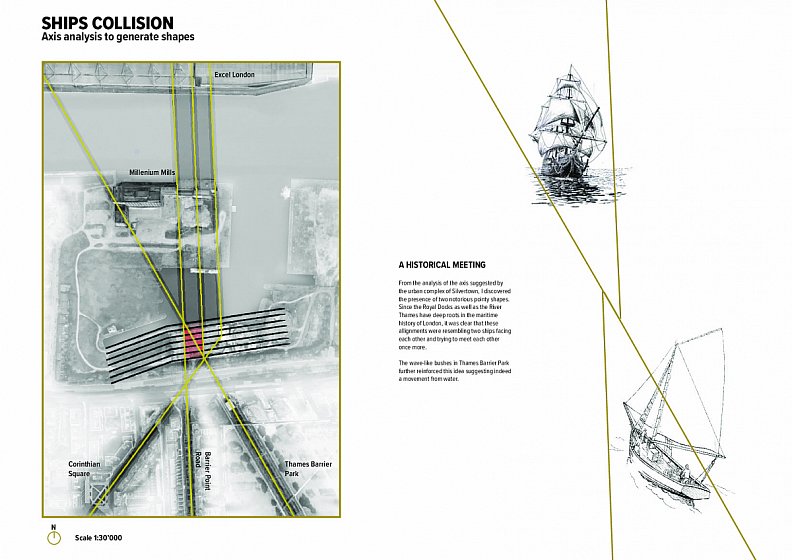 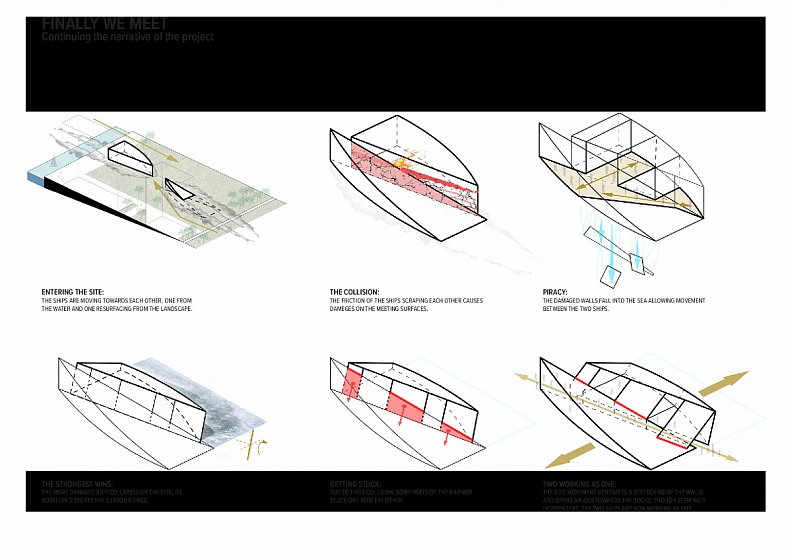 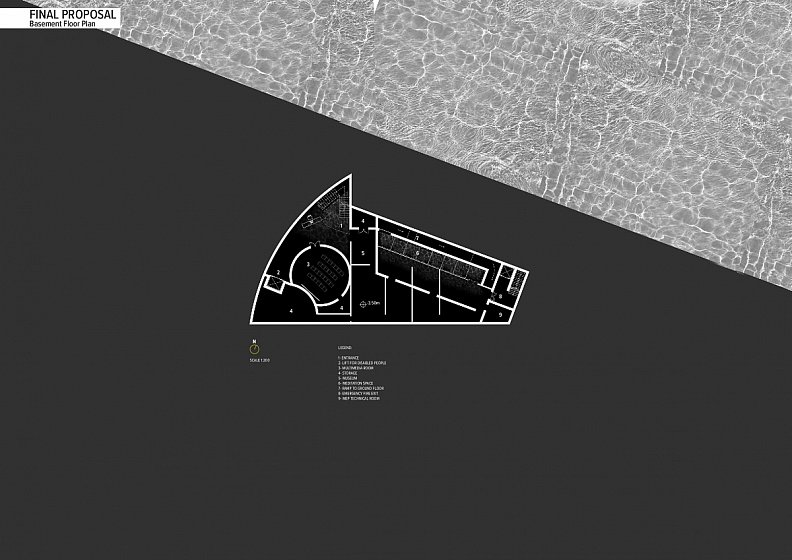 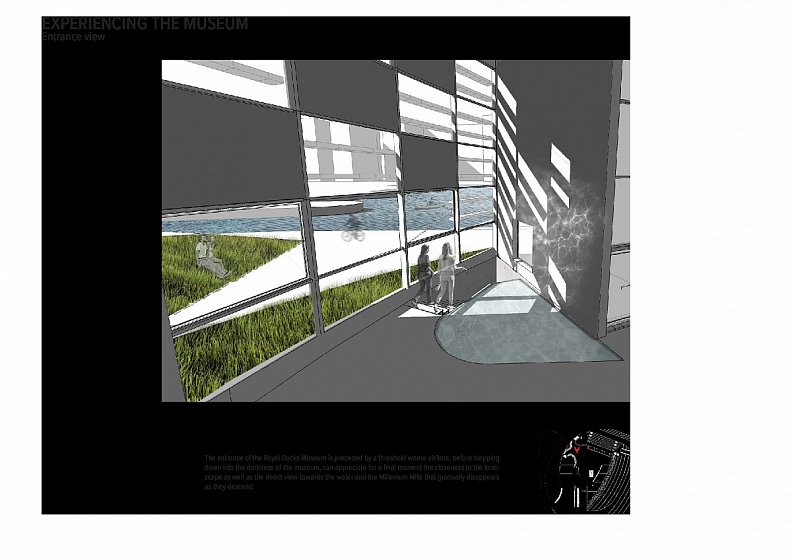 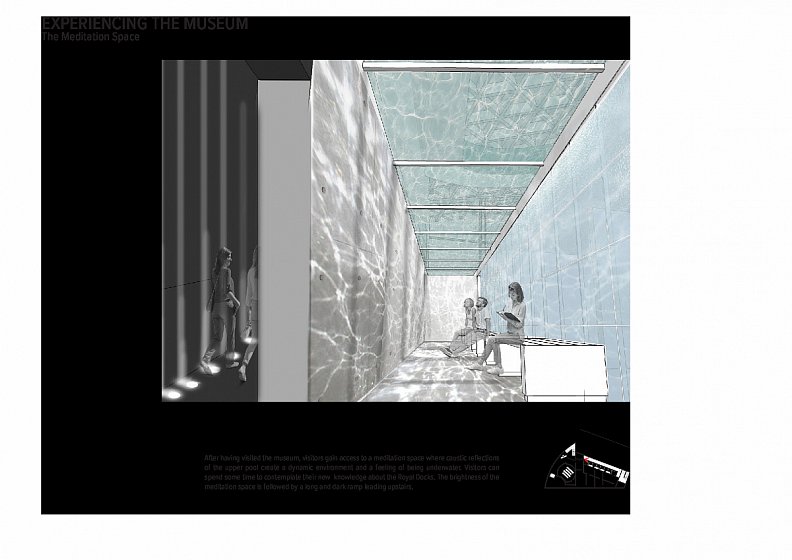 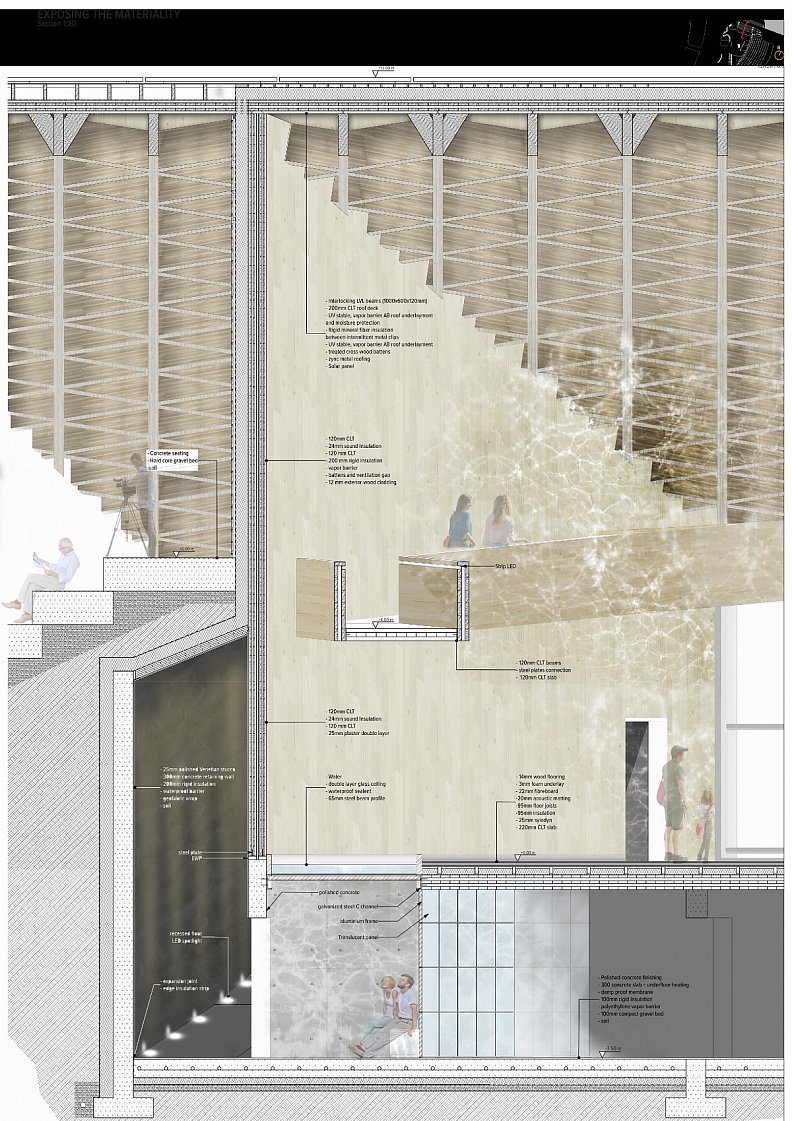 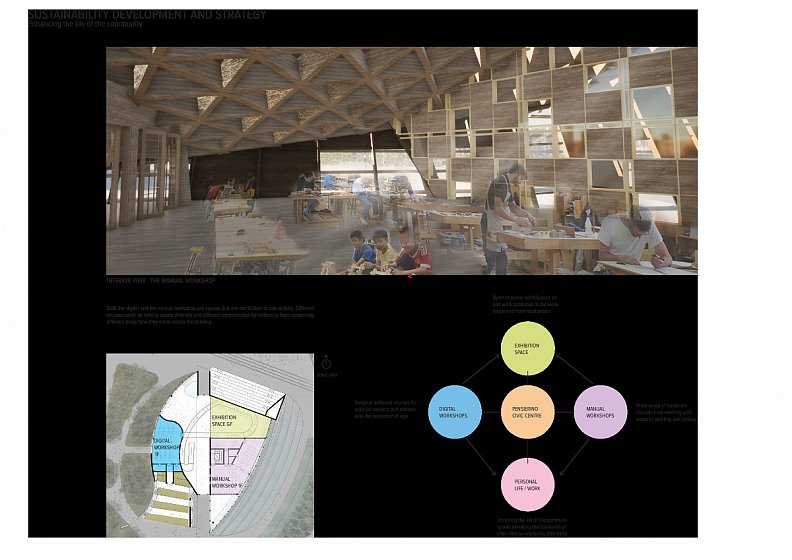 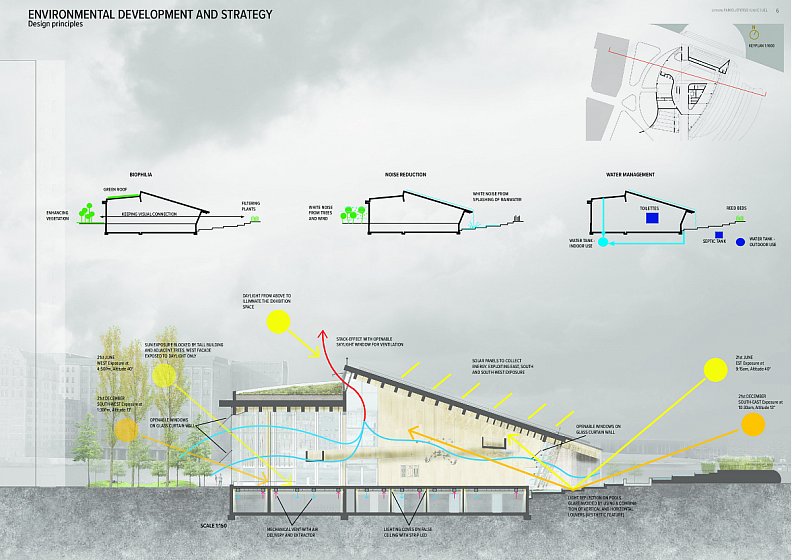 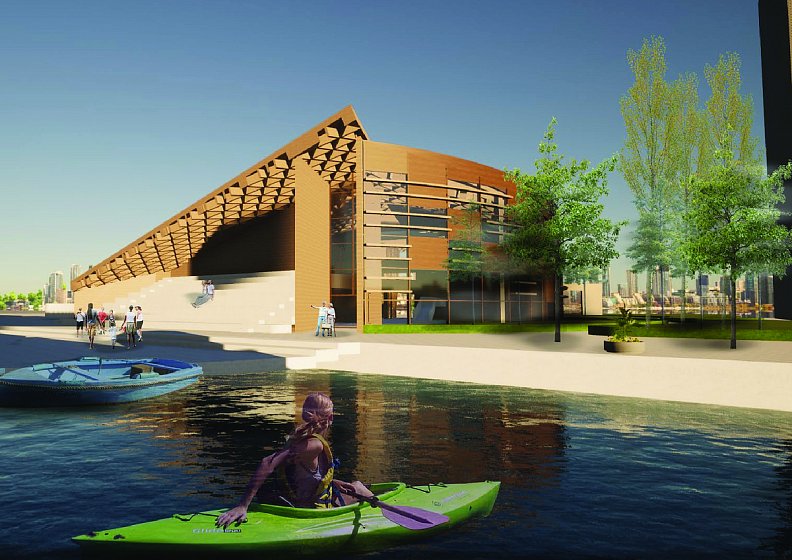