INSPIRELI AWARDS > > Phoenix of Water
Back to the competition gallery
Architecture

The idea behind the design is a method of studying the important relationship between water and land, which were the site’s critical elements defining it as a port. The great history that stands behind the port of Beirut, the present that made it more vulnerable and precious, and the future that holds the hope and the strength of the Lebanese people. These three factors were the first to be considered and expressed in the design through three main elements. Two floors are connected through a grand staircase that leads to the ground level which is an open space right above sea level. It was thought to be this way to ensure a direct connection with the sea, provoking people’s attention towards appreciating and venerating the importance of an ancient landmark that led many ships in the middle east, 5000 years ago

The tragedy following the explosion shook the world entirely. The lives of the people that were lost, the
homes demolished, the economy that is now making many suffer financially, is indeed very upsetting.

Therefore, the people of Lebanon deserve better than just a memorial. Perhaps a landmark that boards greater opportunities and future for the people and their homeland.

We decided first to investigate a little closer. Considering the mark that was left on the site as a result of the blast – revealed new boundaries and shapes for possible implementations. Hence, we started to notice how the land and water merge together as one.

The overhanging slab-shaped memorial is made of local and easily available materials like reinforced
concrete. Moving to the upper level, an enclosed area floats where memories of the lost and history will be
hanged on walls with enough space for hosting future exhibitions, with sky windows on two sides and a central ribbon window that has a focused view framing the sea.

On this floor, we thought to have it closed as a containing element of the present. The two floors share an atrium-like space, avoid, where the main element of the atrium goes through. The vertical element. This part of the monument is meant to express the part of the sea that was revealed as a result of the explosion, it is true that the tragic accident resulted in a negative effect, however, as we see it has opened a new part of the sea and dragged it to the land.

The idea was to lift this revealing element and link it to the wheat factory that is yet to this very day, steady, behaving like a defensive shield that somewhat took most of the explosion’s impact and saved a lot of the people’s homes and lives. A part of the vertical element will be continuous and seen under the water as a tribute to the loss of the Beirut port. The void that connects the different levels allows the visitors to view the linear part that’s heading up and the curve of the linear monument that’s sweeping down to the sea. Because our monument is all about evoking the intangible and the sensory experience, each element in the monument stands for a value, a thought, and a feeling.

Eventually, the terrace area below is a place where one finds peace within themselves. As visitors get close to the water surface, they can see the twist or curve of the vertical element descending to the water commemorating the dead where everything flows away to the rhythm of the sea. The memorial is also separated and layered into three parts, the future resembling the first and second floor supposedly meant for happiness, steadiness, and strong hope; the past being the lowest floor below whilst this one, in particular, is meant for escapism, peace, and rejuvenation. 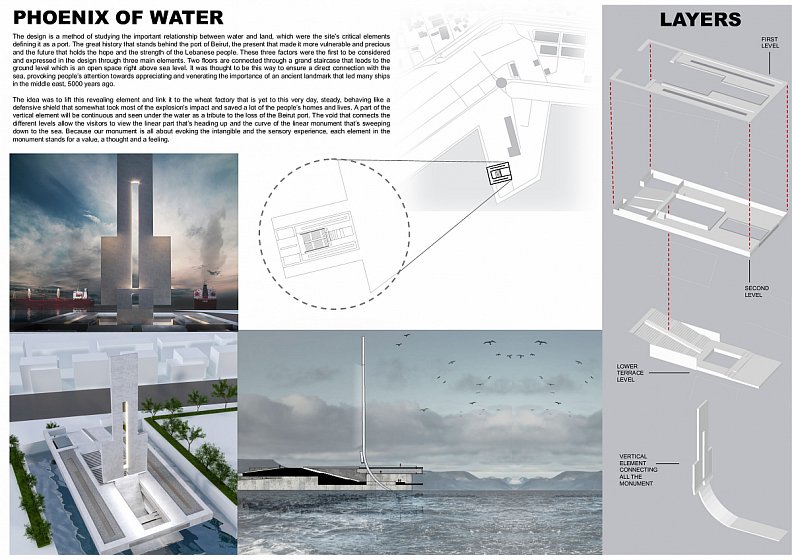 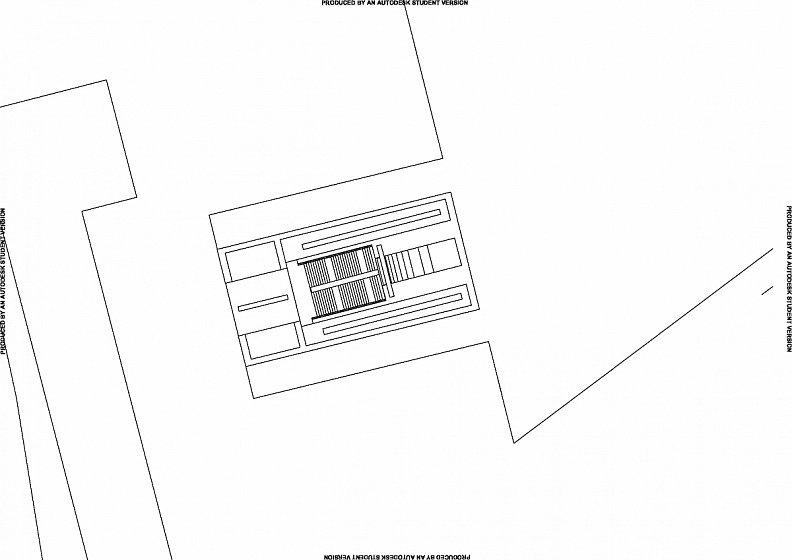