INSPIRELI AWARDS > > I #$@! BEIRUT
Back to the competition gallery
Urban Design and Landscape

Absence as a respectful building material:
The aesthetics of absence propose an impact on the city where its meaning can be defined by each individual. Like a white canvas the void allows new meanings and perceptions to be written every day. Foreigners shouldn´t be allowed to impose a solution or specific shape of memorial, such practices are colonialist and outdated. By applying the void as the center of this masterplan and its memorial our approach remains neutral while impactful.

The new Beirut Port! A landscape of absence. A group of international architects have proposed a new master plan for the ground zero of the explosion in 2020. Their main building material: THE VOID! Their building blocks: NOTHINGNESS AND ITS REMAINS! By isolating what’s left of the silos, they will reconstruct the ocean bay near the city center. A pedestrian bridge encloses the new bay acting as a memorial promenade to remember the victims of the explosion, a “skeleton” to appreciate the remnants of the building that guarded a part of the city from the expansion wave. A double perspective envelops the isolated silos contrasting the ruins with the void of the ocean and vice versa with the dynamic life of an ever-rebuilding city.

The Buildings of absence:

The Shell: An anonymous building that acts as an urban mechanism for the city, and a functional lounge for the people, containing the passenger’s terminal, free zone, and a hotel. It links the surrounding needs of the port; the shell rises as node that glues all the aspects of the masterplan.

The Floating city: An everchanging dynamic neighborhood, placed in the dynamic waters of the sea. Shifting and drifting platforms surrounded by water where people can experience new living standards.

The university of Ruins: As a beacon of knowledge and an economic hatching machine, the university will reinvigorate the now destroyed part of the city with young brave students. Organized in a series of quads, essentially “NOTHING SPACES”, the university generates an acropolis of buildings and green paths that fills with life the new board walk around the Silo’s Bay.

Skeleton Bridge: With twenty-two main supports, this bridge connects the new path of the Corniche with the shell. It contains the name of the two hundred and twenty victims of the explosion. It allows to remember the catastrophe but to also admire the perseverance of the people of Beirut by admiring the skyline.

History Museum
The History Museum of Beirut as fragments, from the city, its memory, its identity, its habitants wich have been built and rebuilt.

Convention Center
The convention center as the need of the human being to interact and exchange ideas is articulated with the cultural historical diversity developed in Beirut over time, which is connected through a versatile building with the ability to integrate the city with its public spaces.

Faculty of Architecture
The faculty of architecture as a contemporary approach to reconstruction. This evolution center seeks to be a space of appropriation for students, where they can analyze and solve the challenges of living in a city as changing as Beirut and where the past of the city converges with the future of design.

Faculty of music
The faculty of music as a living score. Moving through a building should be not only a visual experience but a sonical one as well. The faculty is conceived as an auditory sequence, as a piece of music.

Faculty of Cinema
It explores architecture as montage, understanding the montage as the process of overlapping layers which contains events in different levels. The building works as a camera that lets the user experience the space and the city through visual framings just as a camera would.

Faculty of Economics
The faculty of economics and administration works as a reinterpretation of the traditional souks of Libano. The building is divided into two main parts emulating the human body, where the head represents the zabazoque. 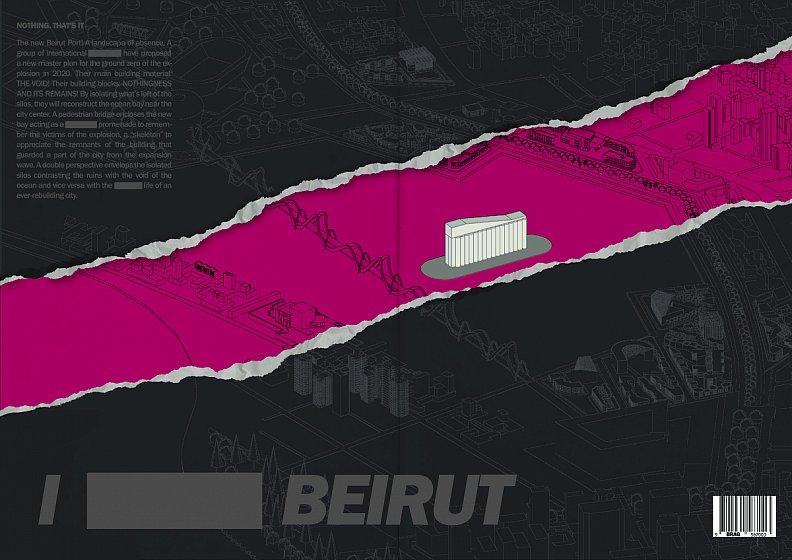