THE BURKINABÈ THEATER OF ARTS

The Burkinabè Theater of Arts: a cultural showcase

More than the rehabilitation of a theater, it is a cultural center dedicated to the whole Burkinabè population. True showcase of local arts at an international scale, it displays Burkinabè culture and celebrates its many ways of expression through a program that doesn’t focus only on the arts of the theater. Seen as a dynamic place, it will allow its users to discover local artists through workshops and exhibitions, encourage artistic expression through an open stage and have a pedagogic approach to show and transmit burkinabè culture to the youth.
As a key point of the city, it is well connected to its surroundings, including the notorious cycle market of Samandin. However, the project is set into an agroecology area that will evolve throughout the seasons. This area contains different kind of plants working together in order to offer a stable ecosystem with a minimal need of maintenance to produce goods usable by the population. On the south-west, is organized a sculpture park, displaying permanent works of local artists. Linked to the unformal fields on the banks of the central channel, this creates a cultivated green ring protecting the theater beyond its borders.
Rather than dividing the project into the three zones depicted as «Work, Show and Labo», it is organized in «concessions», a tribute to Burkinabè vernacular dwellings hosting families together. Here it is the artistic families that are defining spaces, linked to each other by a specific treatment of the greenery.

The site : a dynamic and ever-changing space

The numerous concessions are thus offering various programs: arts and crafts, administration, media library, recording studios, exhibition spaces, restaurants, costume and set design workshop, educational spaces and of course the theater itself. They use the same angles and axises as the ancien theater’s geometry to enhance the visual bound with it, and to offer multiple views. Their implantation is guided by those axises as well, every building being placed on a directive line issued from the remaining bleachers.
In order to maintain the links between them, curved and undulating walls, as well as some paths, guide the visitor on the site. They are made with the same materials as the concessions themselves. Breaking with the geometric rigidity of the frame and varying in height, they offer a route, sometime some seats, and orient the views, notably on the concession themselves, or towards the center of the site, considered as the very heart of the project.
This place is occupied by the massive main stage and its bleachers, but also by other equipment. Down the existing slope, nearby the trees that we kept as much as possible untouched, are set up a well and a secondary stage. Without bleachers or spotlights, the sobriety of this space; which consists only of one circular slab a bit elevated from the ground level; invites to spontaneity and appropriation. This central space can easily welcome street performances, market’s stands or other outdoor events.

The construction : a shape guided by the elements

In order to preserve local know-how, the project is carried out mainly from adobes produced on site with the resources of the area. The modest size and weight of the bricks allows everyone to be invested in the work and therefore to perpetuate this technique.
Each concession is built following the same principles. A mineral slab separates the concession from the ground, preventing the bottom of the clay walls to be exposed to water during the flows of the rain season. On top of it, sun-dried adobe walls are built in a participative manner to bring a pedagogic approach to the making of the theater. A concrete chaining then crowns the walls, linking them together and ensuring the junction with the roof. According to the uses of the building, a concrete slab will or will not come to rest on these walls to close the space under.
Made out of metallic sheets fixated on arborescent steel structure, the roof protects the walls and even offers a sheltered passage by largely exceeding the limits of the rooms below. Like Francis Kere’s creations, we therefore integrate the principles of natural ventilation into our design for an optimal ratio between user comfort and maintenance costs. Each concession is organized around a cooler inner courtyard raised above the surrounding ground. These light roofs are tilted on the courtyard’s side and detached from the walls in order to allow this natural ventilation in the building. In this way, the colder air can easily cool down and regulate the temperature inside each building. Moreover, this specific inclination inwards the courtyard enable the rainwater to flow towards the center of the concession where it will be collected by a small channel.

The theater : a landmark true to its roots

Due to its dimensions, the theater appears as a true monument. Around the site we see it emerging from the treetops. If the rest of the concessions are rather staying low, closer to human scale, the main stage is covered by a long span vault. The site entrances, also marked with brick vaults, echo it. The bleachers were kept untouched. However the scene went through transformations allowing it to host performances requiring modern staging techniques. 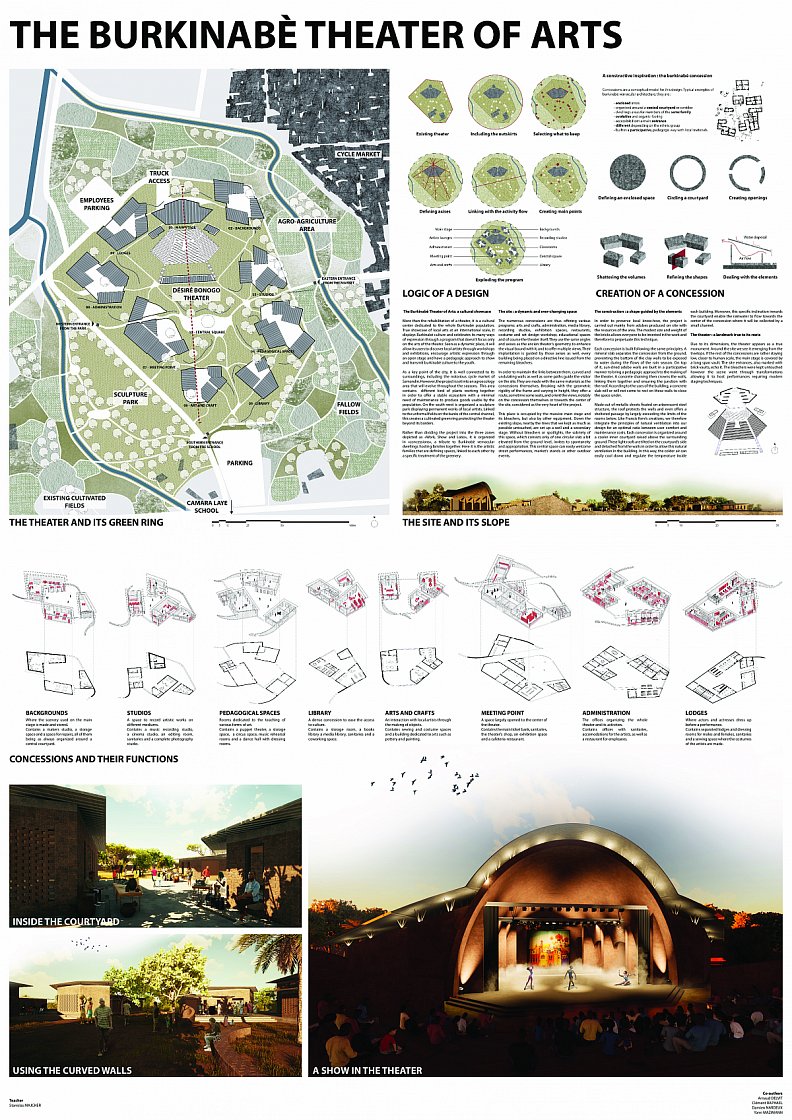 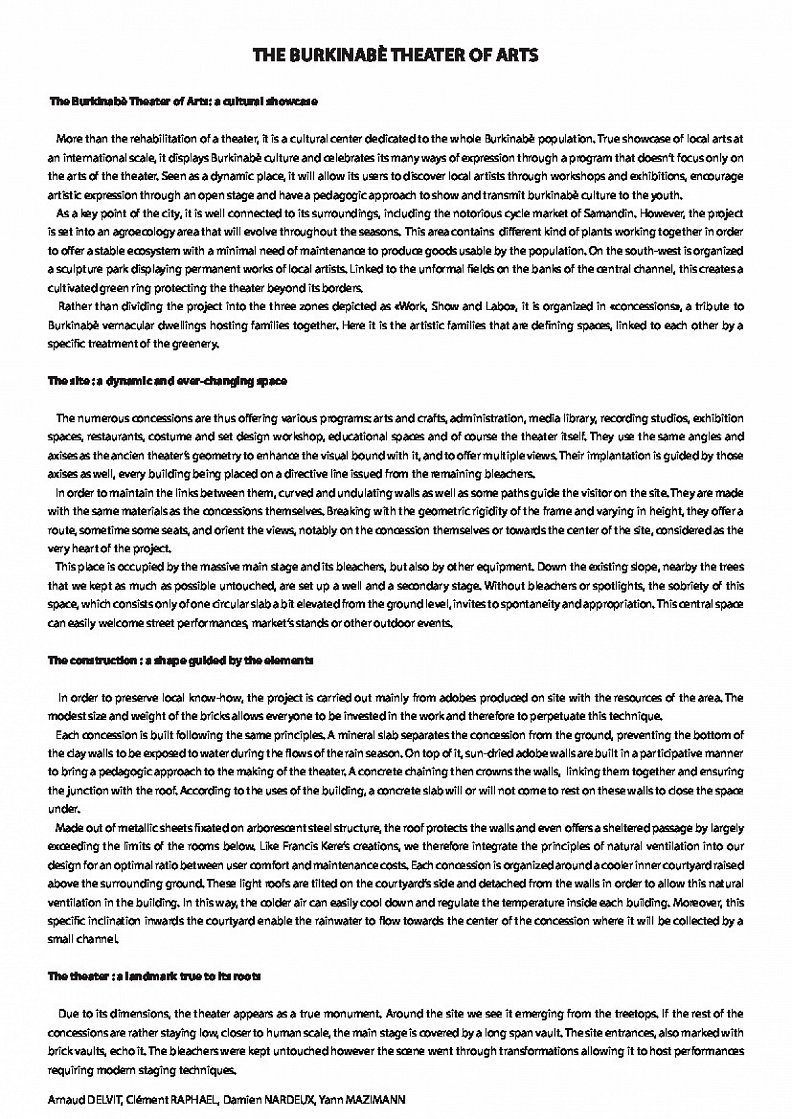