The base is located in the boundary space of Laicuo Village. With the development of industrialization and the acceleration of the process of urbanization, Laicuo Village has been expanding in size since 2004, so its village boundaries are also expanding outward. But even so, the base has remained idle since 2004. Perhaps the reason is that the base is located in a remote location compared with the village. It may also be that there is the largest waterscape in the village next to it. In any case, it is a fact that the plot has been idle for almost 20 years, so villagers are used to the "empty" state of the plot and are used to crossing the empty land. Therefore, this design also carries out the concept of "emptiness" all the time, trying to fill the building volume into the site as little as possible, but redesigning the site to return it to the villagers for free creation.

The traditional architectural design will take the main building as the main body, and connect the building volume through the traffic system, followed by the design of the remaining space, such as gray space, overhead space, etc.
However, the solid building volume is obviously not the carrier of the design concept of "emptiness", but the secondary residual space attribute in the design is highly consistent with the concept of "emptiness".
Therefore, this design attempts to reverse the traditional design process, taking the remaining space as the main body of the whole design, and taking the design of building functional mass as a secondary position.
The concept of "emptiness" is similar to the blank space in Chinese landscape painting. By leaving seemingly useless spare space, the effect of suspense can be achieved, so that the receiver can fill in the blanks when arriving at this site, and the sum of the blanks of each receiver also constitutes the artistic conception of the whole architectural work.At the same time, the base is located at the border between the city and Laicuo Village, which is a fuzzy factor in the edge space. Therefore, combining the two interfaces, the base gives a layered functional response to the two people flows. The upper layer is an exhibition hall facing the city interface, while the lower layer is a community center facing the residents of Laicuo Village. This fuzzy factor can achieve a new balance by functional composition. 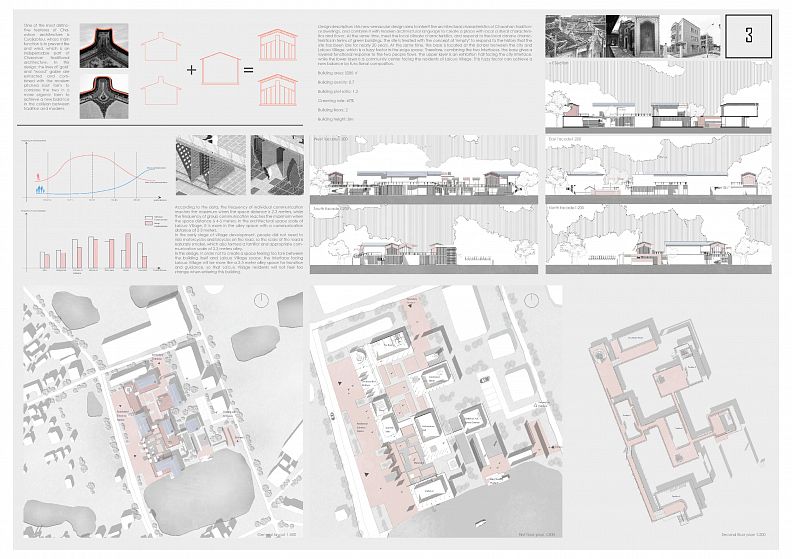