With this planning, we wanted to incorporate mechanisms to improve sustainability from various perspectives. Beirut has long been the political, economic, financial, cultural, and tourist center of Lebanon, and was often referred to as the Paris of the Middle East, but by the time the civil war broke out and ended, Beirut had surrendered its established position to neighboring cities such as Dubai. Furthermore, government corruption and the currency crisis have caused further damage to the economy and have already had an impact on living infrastructure, with severe shortages of goods and regular power cuts due to fuel shortages, and there are fears of water shortages in the future. In addition, the explosion at the port and the damage it caused are still fresh in the memory. The investigation into the explosion was complicated, and there were clashes among the population over the response to the explosion, which led to the resignation of the government and political chaos. Even before the explosion, Beirut's economy was considered to be in need of revival, and it is now expected to recover rapidly. This time we did not focus only on the port, but also on all the other functions that comprise Beirut, such as the old town and the city center to integrate the whole city. In order for Beirut to rise again, by promoting the economy and commerce, and restoring essential port functions, new perspectives are needed to overcome the conflicting factors of being the center of Lebanon and the unstable situation based on various reasons. Our proposal is based on 'SEAMLESS' and 'SUSTAINABLE', reorganizing functions, creating a streetscape linking the old town and the port, providing new employment opportunities, installing spaces where diverse people could come and spend comfortably, achieving new attractiveness to be a sustainable city, and incorporating into the space of the memory and the condolences.

First of all, the principles of the project are based on the two axes of 'SEAMLESS' and 'SUSTAINABLE', as mentioned before. The basic principles are ‘create a gentle connectivity between the port and the old town by mixed use’, ‘provide opportunities to connect people living in and visitors to Beirut’, and ‘utilize unused spaces where have potentials’, and with these principles, we intend to link the past, present, and future, to connect people of different religions, to connect residents and guests, and to connect the port and the city. We believe that by connecting these diverse boundaries, the city could be sustainable for decades to come. Next, the main feature of the competition, the port, has been reorganized and the efficiency of the transportation system has been improved, while the existing equipment, such as cranes, has been kept in use so that the port can be expanded and developed in the future, as it was intended to do before the explosion. Additionally, we design a new passenger terminal opening to the public inspired by the Lebanese cedars and sailing ships, which are still recognized as essential icons in Beirut. The port and the city center are not clearly divided, but instead, commercial functions and open spaces are created to achieve a gradual and harmonious transition between there. Finally, the shopping streets, the memorial square, and the greenbelt are proposed as spaces that connect the port and the city center and add a new character to Beirut. The shopping streets with sufficient width, are intended to encourage activity on the street by limiting the function of the ground floor that attracts people and brings vitality to the city and its streets. The memorial square will be developed as a waterfront space, retaining some of its original forms, in order to preserve the memory of the explosion and to pay tribute to the victims. The greenbelt, which visually connects these spaces to the port, is intended not only to create a pedestrian pathway, but also to create a new feature for Beirut and to provide opportunities to be an environmentally friendly city, and the trees to be planted must be maintained and conserved by the surrounding stakeholders of the port and commercial area. 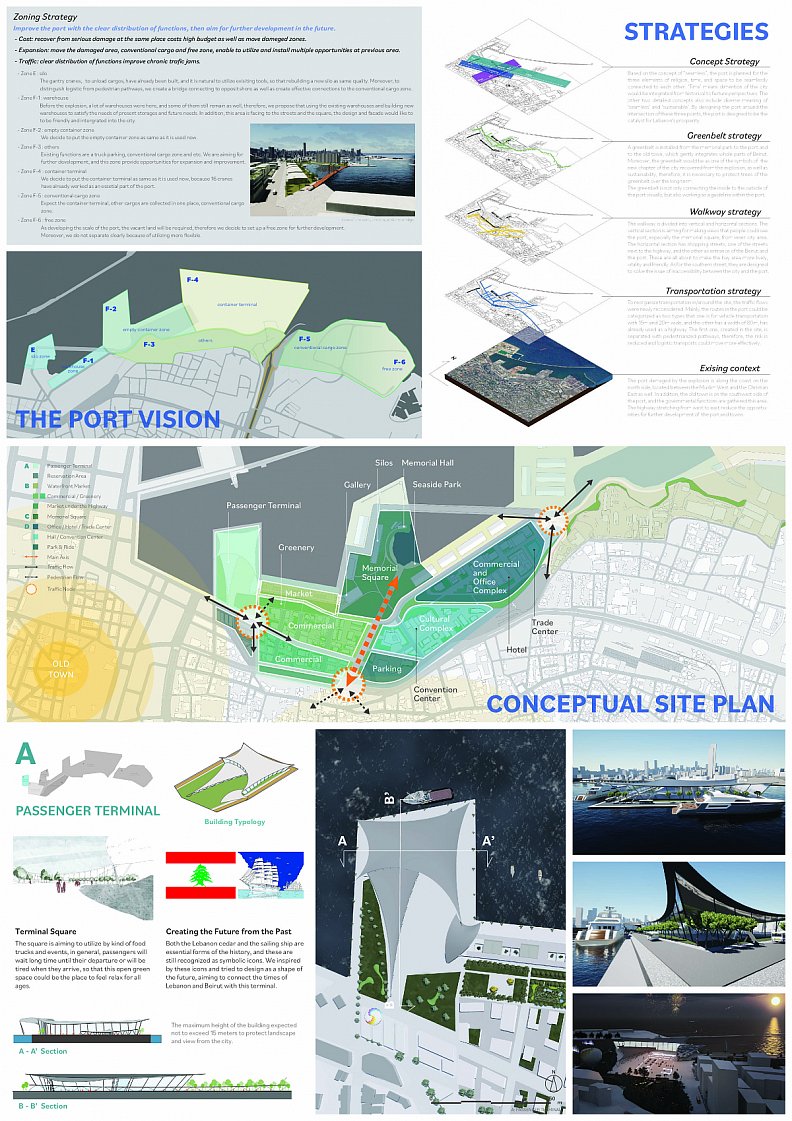 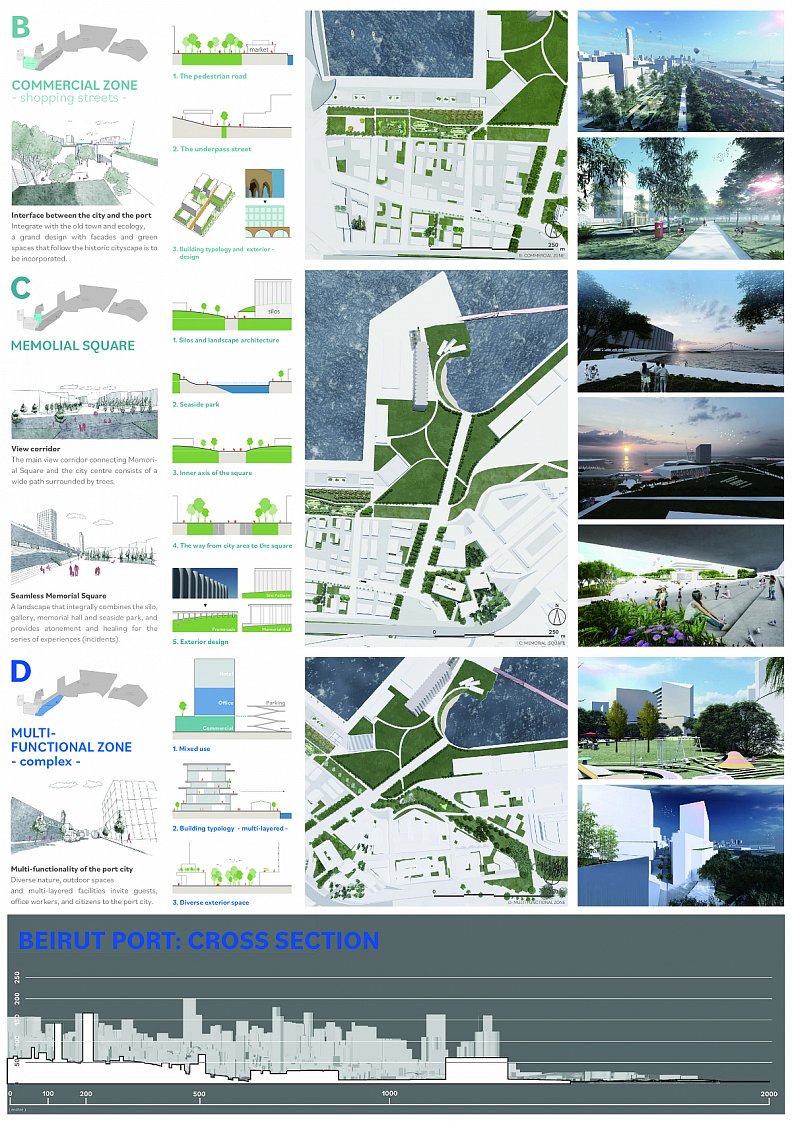