INSPIRELI AWARDS > > COMPLEX OF COMMUNITY
Back to the competition gallery
Architecture

The complex of community is a place where all the people have the chance to find such a cozy space to gather and spend time there. the project aims to be the new city spot of the walled city, Famagusta, Cyprus. to bring the locals, students as well as the tourist together to spend time, make memories and make it unforgettable. the concept of The complex of community came straight from the context of the site after studying and make researches and here is The urban morphological character of the Walled City today can be described as :
- Organic street network with cul-de-sacs
- Centrally located Piazza dominated by the Lala Mustafa Pasa Mosque
-Attached two-storey buildings (so called Terrace Houses) along narrow streets with
usually 1-1 (width and height) in proportion
- Ruins of historical monumental buildings sparsely located throughout the Walled City
- Large, undefined open spaces (voids) –around the ruins, along the Walled City, usually
to the south-east and north –that can be considered as lost spaces
- Contemporary buildings that are incompatible with the morphology of the area
The Walled City houses the traditional core of the whole city and the land-use of the
area presents a max-use character with houses, shops, offices, coffe shops, and cafes. with taking into consideration the historical value of the walled city. I started with the street pattern and the accessibility since the streets have the organic fabric pattern and the project located in the nimik kemal square and between the most important monumental building which is Lala Mustafa pasha mosque, and from back Sinanpaşa mosque. so I chose a point that has no vision to Lala Mustafa pasha mosque and the axes of Sinanpaşa mosque then decided to make continuity of the organic fabric pattern through my building,To encourage the continuity of the organic pattern of the site and give the people perspective view to the Lala Mustafa pasha mosque.

“All ships and all wares must needs come first to Famagusta.”

Time is a complex phenomenon for human experience as well as architecture. Our lives consist of space and time. The transformation of our physical environment is result of our changing lives and inevitable architecture is in this circle of change. As Juhani Pallasmaa (1996) wrote in his book The Eyes of the Skin: Architecture and the Senses: “Architecture emancipates us from the embrace of the present and allows us to experience the slow, healing flow of time.” In this sense, historic structures have their own charm however since change is inevitable in life, so does architecture. Cities, streets, buildings evolve and change according to the needs of their inhabitants to meet new dynamics of life.

“One of the great beauties of architecture is that each time, it is like life starting all over again.”

Famagusta had been the island’s most important port city and a gateway to trade during the Middle Ages therefore has a rich culture both in terms of, history, architecture, as well as social structure. It was said that by the middle of the 14th-century, Famagusta’s citizens had built some 365 churches -one for every day of the year. As layers of history visible in the remains of buildings, today there are almost 200 buildings in the Walled city reflecting Byzantine, French Gothic and Italian Renaissance architectural styles. The changing urban fabric of Famagusta over time has been problematic due to lack of enough restoration and revitalization as well as not well-planned contemporary developments within the city walls. If there would not be political dispute between the two major communities of the island, Famagusta as a city of such enormous importance would normally receive millions of dollars of monuments aid each year.

This project based on the scenario that political problems have been overcome, Famagusta became UNESCO Heritage site and with the initiatives of the local authorities the entire plot next to Lala Mustafa Pasha Mosque has been served to create a new city icon which will serve to the public.

“The beauty of the landscape – where sand, water, reeds, birds, buildings, and people all somehow flowed together – has never left me”.

This new city spot aimed to bring the locals, students and well as the tourist together based on a specific program. However, designing next to a 700-year-old monument is not an easy task. While adding new layers to the historic urban environment, the context you need to be carefully recognized, interpreted, and sustained the heritage values including culture, history and architecture of the city. The geography and history of the place should be significantly considered because designing new buildings in such historic contexts must integrate the qualities of the past with the present. Without a doubt, past of the city provides an enormous source for building the future of the city. All these in mind, changing dynamics and situations regarding to the city of Famagusta are to be thoroughly searched and known for the improvement of design ideas.

In that sense, high level of respect and respond to the values of the past and present societies and enhancement of them is required for the benefit of all people ranging from local people, students to the tourists in the city of Famagusta and the island. Such new designs in historic environments are always open numerous discussions amongst, scholars, practices, politicians, etc. It is therefore in this project a great attention is given to consider every design attempt as a strong response and respect to every artifact in every sense of urban life in a Mediterranean city. Along with the socio-cultural attributes of the environment, a special attention is expected for the consideration of proportions, scale (height and massing) of neighboring buildings, solid-void ratios, building materials and detailing, architectural elements and typologies, urban density and pattern, etc. In brief, ‘architecture of the city’ is to be well known!

Good design will surely increase the attention and care of people towards this area. They will know how to use and behave in this area by developing their sense of attachment. Also, increasing public interest in this area will be notified by investors and cause enhancement of the area and the surrounding environment with more investments. 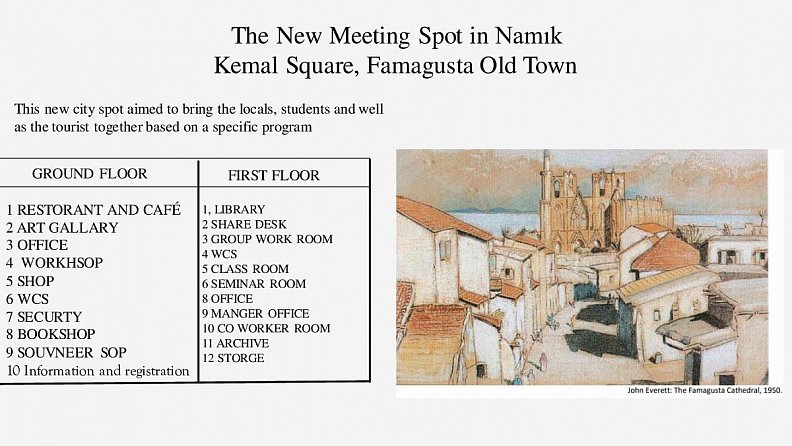 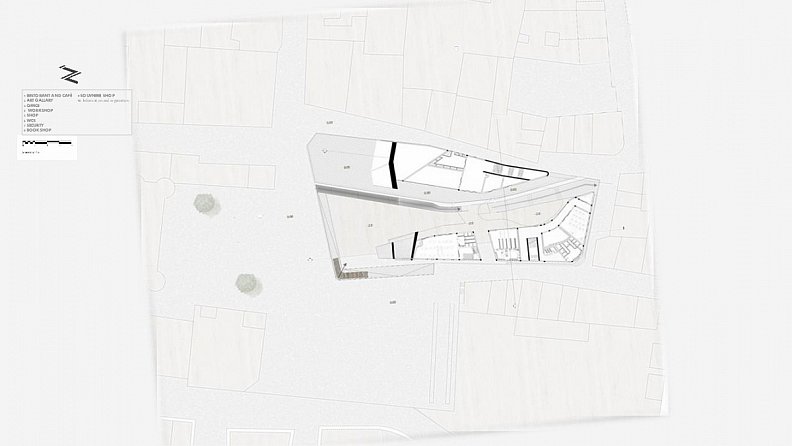