The thesis project has as its objectives the protection of cultural heritage and the delicate coexistence between archeology and architecture. The principle that dictated the guidelines in the implementation of the intervention was to pay particular attention to the readability of the designed spaces without making the new intervention predominate, formally and volumetrically, over the ancient, respecting the monumentality of the place.

The new museum is placed in a position in direct relationship with Villa Adriana, in particular with the "Cento Camerelle" and the Great Vestibule. It is for this reason that it was decided to change the access system with respect to the contemporary one.
Currently, in fact, access takes place at the Greek Theater, located to the south, where, through an uphill path, you reach the hinges of the Villa. Reflecting on its scarce practicality and on the positioning of the new building, it was decided to move the start of the visit by recalling the old entrance.

On the side of the paved road that runs alongside the Cento Camerelle, a new road was found, always paved but placed at a higher level, which allows to reach the of the Vestibule. After this discovery, new considerations were made on the subject of the entrance to the Villa, because in fact, the discovery of this new road, which leads to the Vestibule with its wide staircase, seems to suggest one of the monumental entrances to the Villa. From here it was decided to recall the memories of this passage and to define it as the only new access to Villa Adriana, almost throttled by the presence of the new museum, next to the "Cento Camerelle".
From the perspective of the route, a new exit has also been defined, different from the entrance unlike the current situation where these correspond, which is located near what was the ancient access of Rocca Bruna.

In this way, the presence of the museum is grasped both at the entrance, seeing the closed front overlooking the "Cento Camerelle", and at the exit, where the positioning of a large basin recalls the view taken along the Canopus. This is where the actual entrance to the new museum comes in.

The museum project involves the identification of two different heights, which correspond to one of the access, located at zero altitude, and one to the level where the exhibition halls are located, that is, at an altitude of -7.70 m.

The entrance is characterized by a long external linear path which, along a long pool of water in reference to the Canopus pool, leads up to the internal foyer.

The visitor, therefore, has the opportunity to access the interior of the three quadrangular volumes that protrude, of which the central one corresponds to the entrance. The other two, placed on both sides, perform receptive functions.

Outside of these volumes, the path is free thanks to the definition of practicable green roofs which, on the one hand, uniform the design of the museum with that of the surrounding landscape, and on the other hand it allows to grasp its beauty through a direct view of Villa Adriana .

As can be seen from the plan, the asymmetry predominates over the composition, and is accentuated in particular by the presence of a circular opening to the west, which corresponds to an underground tholos temple.

Access takes place, therefore, through a central entrance which, squeezed between two winter gardens, leads to the area dedicated to the ticket office and the shop, closed in on themselves thanks to the presence of a tuff wall, which delimits them. This, in fact, defines the threshold beyond which one enters in effect the exhibition area.

After the ticket office, a large monumental staircase takes the visitor to the lower level to begin the museum tour.

Once in the Atrium, you notice how this environment is characterized by various elements, which give it a monumental and symbolic image.
In the northern area of ​​the room, the base that supports the central body, in fact, extends inside, assuming the function of a raised plateau on which display supports, clad in serpentine marble, allow the best enhancement of five statues and various friezes found during the phases of excavation of Villa Adriana, currently preserved in the Antiquarium of the Villa itself.
In the southern part, however, a rectangular swimming pool characterizes the space and assumes a dual role: it is itself the exhibitor of the large central obelisk, currently located in the gardens of the Pincio in Villa Borghese but formerly belonged to the Antinoeion of Villa Adriana; and collector of rainwater due to the large quadrangular hole in the roof.

The museum itinerary is divided into two levels: a first that overlooks the Cento Camerelle stock through the slits of the north façade, characterized by large exhibition spaces to compose a fluid and defined path, and a second level, behind and introspective, which, arranged to the south along the wall against the ground, it defines a long linear arched space, in reference to the cryptoporticos of Villa Adriana.

The arcaded gallery, the Porticus, opens into two rectangular exhibition rooms and frames the center of the previously mentioned underground tholos temple.
You can also notice the presence of a restaurant, with independent access, in exclusively visual continuity with the museum's exhibition rooms.

Throughout the composition, the role of water proved to be fundamental, to maintain the relationship with the architecture that is also established inside the Villa.

The north elevation can be considered the most expressive and emblematic front of the project, as it evokes, from various points of view, the character of Villa Adriana.
The challenge was to create a front that had a direct confrontation with the Cento Camerelle, in order to dialogue with each other while respecting them, without however overpowering them.

The compositional idea is to create a linear front that maintains the same relationships between solids and voids of the archeology in front (a ratio of 3:1), to resume its shape and materials. Like the Villa, the new museum is almost entirely made of tuff blocks. This desire to take up the classic motifs, typical of the area, is mitigated by the presence of architectural elements and materials of a contemporary matrix: in fact, we note the presence of the three volumes that stand out in terms of composition and color compared to the front.

In particular, the central volume represents a space in which internal and external coexist and the relationship between archeology and contemporary architects is clearly defined. This is allowed by a large window that allows the visitor to appreciate the Cento Camerelle also from the inside.

The linear exterior is punctuated by transparent vertical elements and full tuff elements that take on the function of scenic backdrops for a cycle of statues that represent all the Roman Emperors up to Hadrian: the presence of the statues is a tribute to the book Memories of Adriano by Marguerite Yourcenar, who claims that the Cento Camerelle were the place of residence of the guards of Villa Adriana, and that they controlled every entrance.

Similarly, the statues on the northern front want to evoke the controlling role that that area had.

The whole façade is immersed in dense uncultivated vegetation, with the aim of leaving the pre-existing flora intact as much as possible. 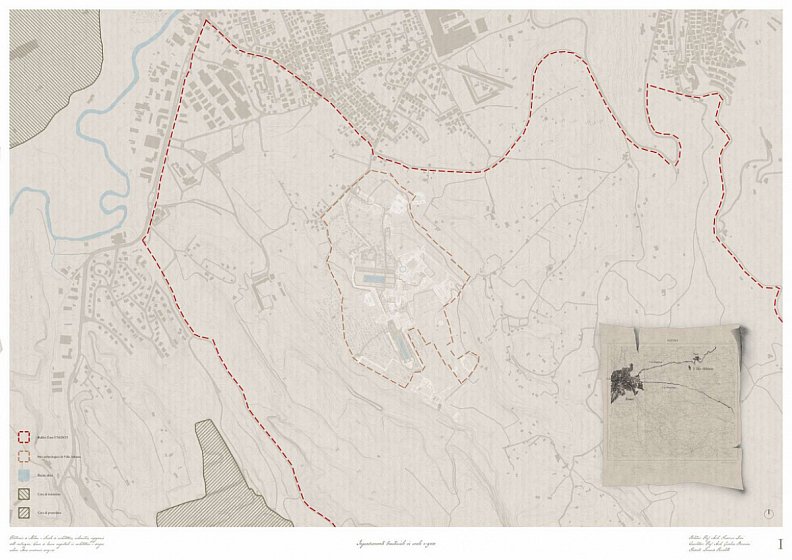 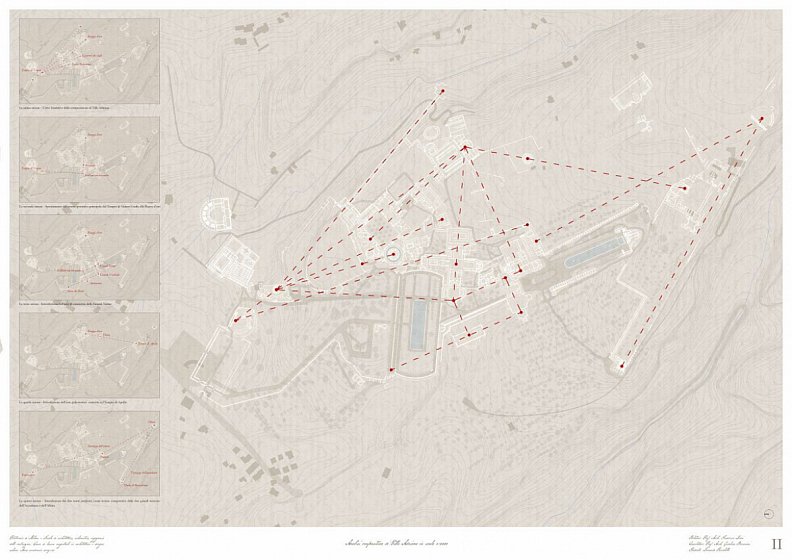 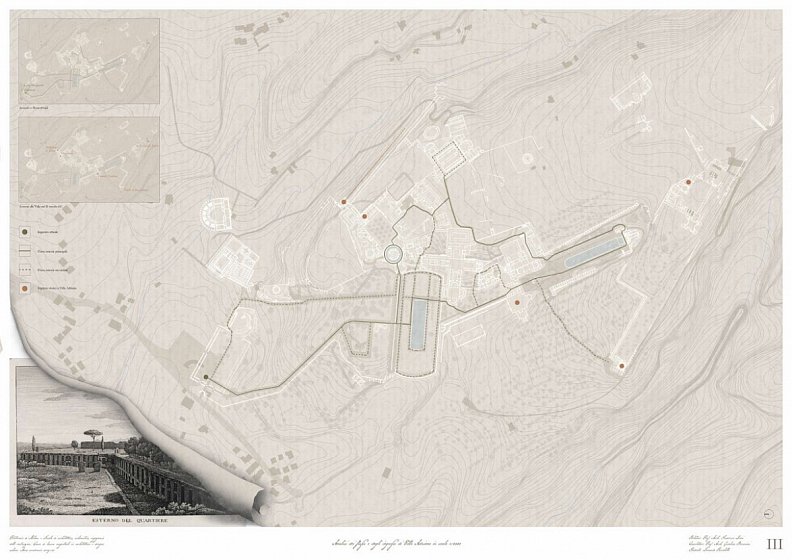 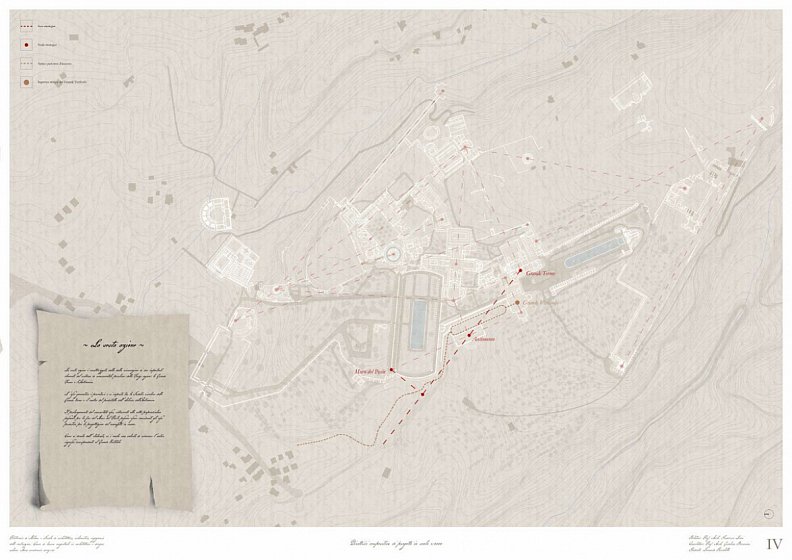 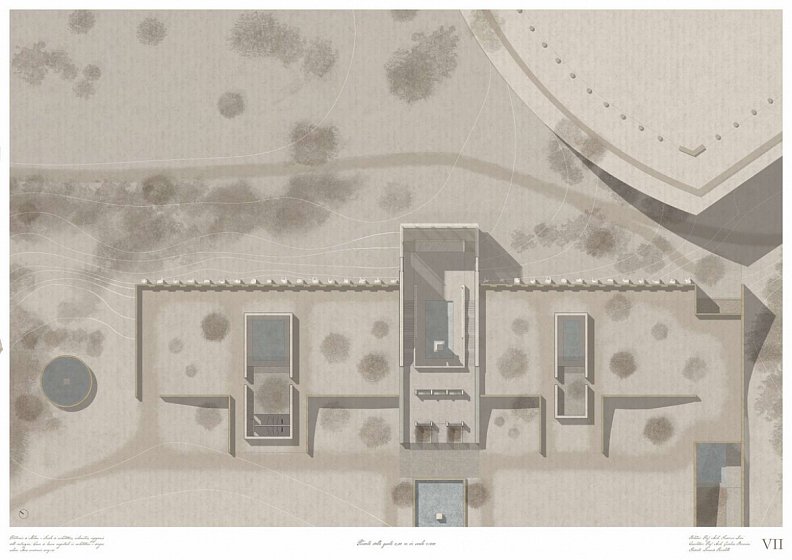 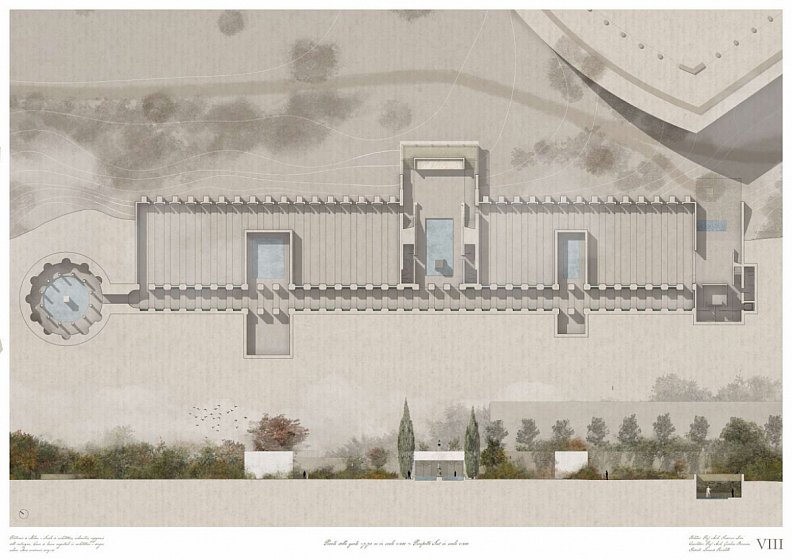 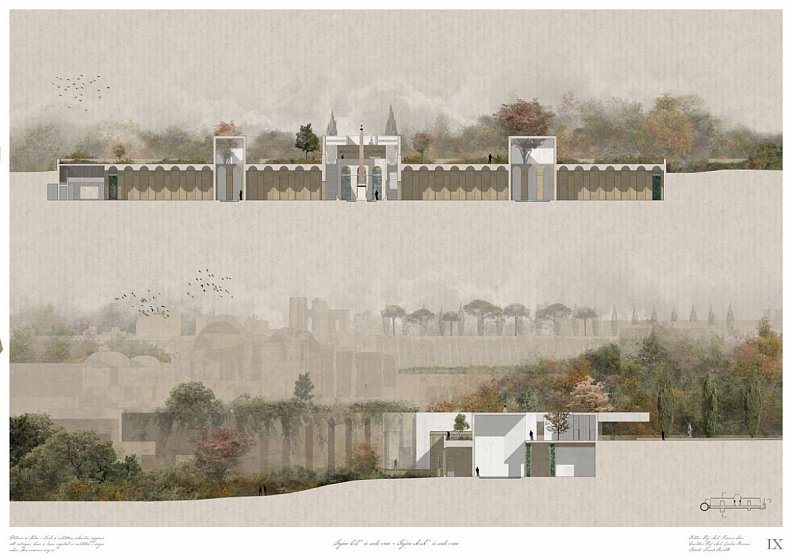 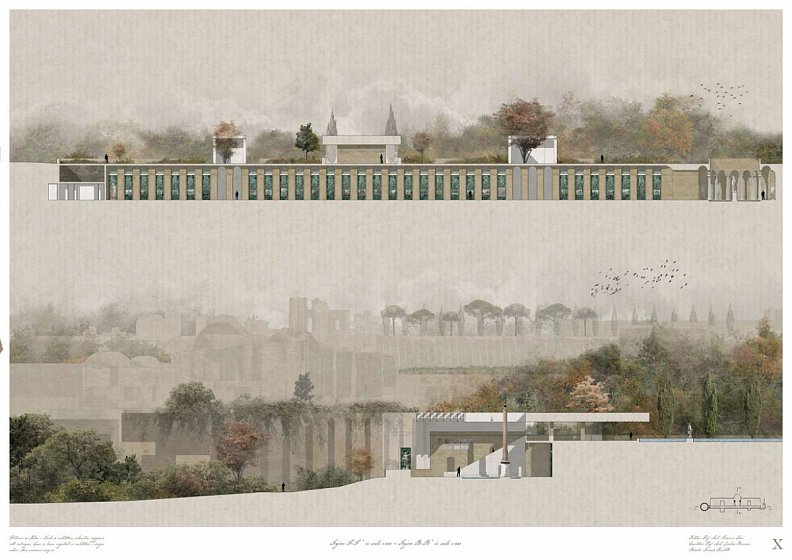 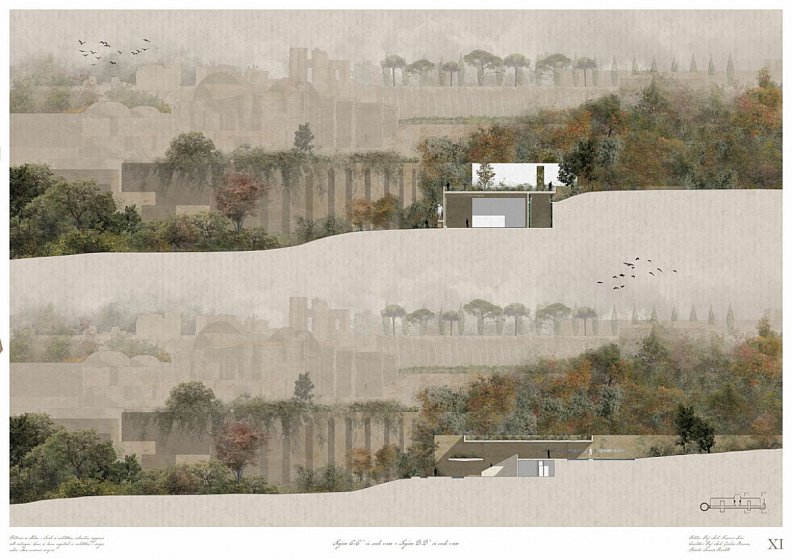 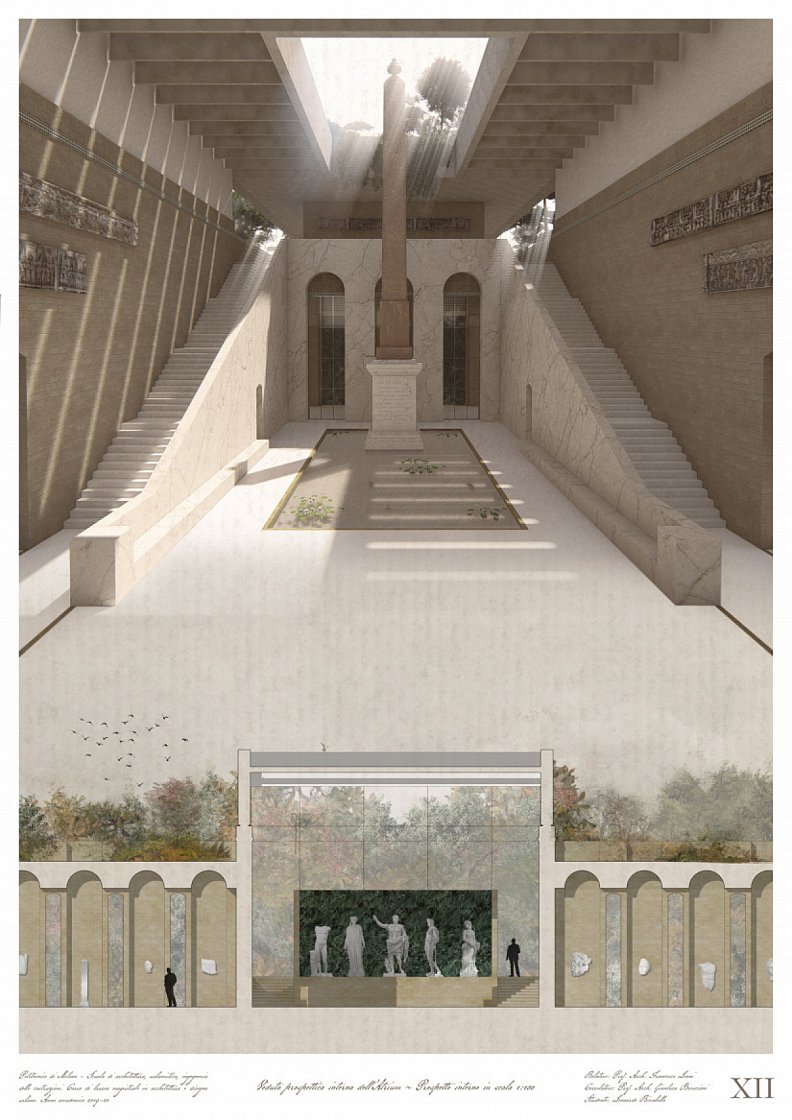 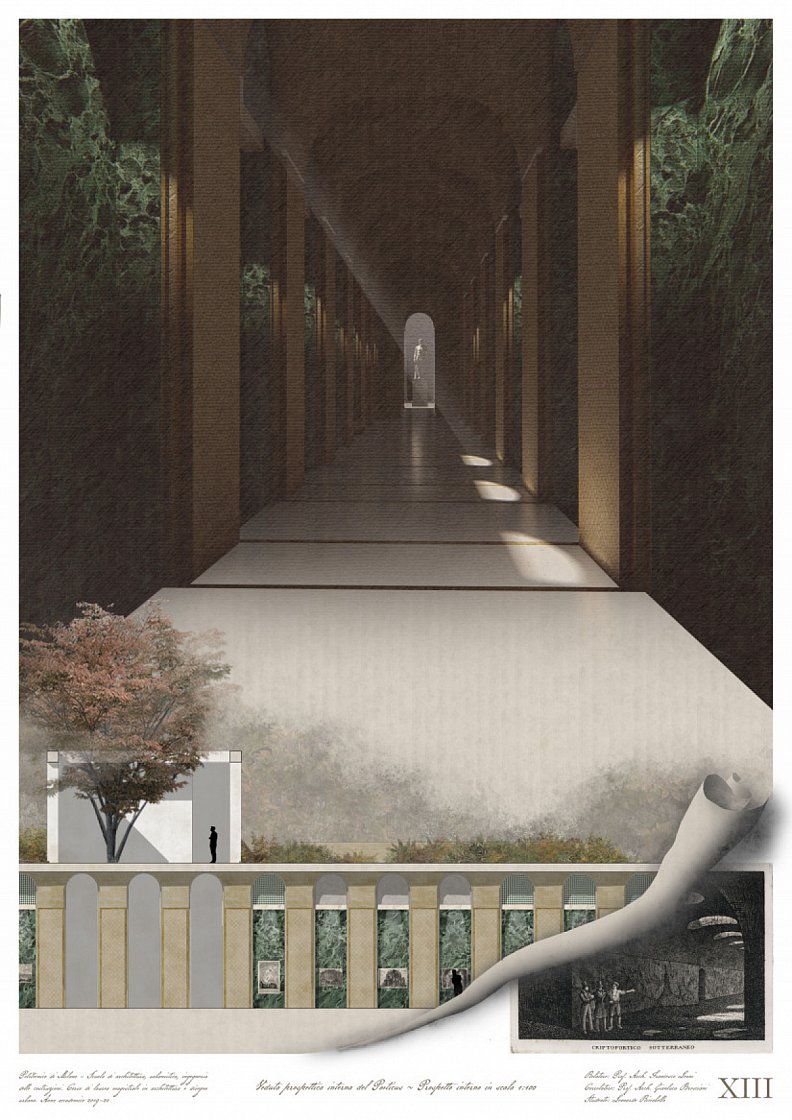 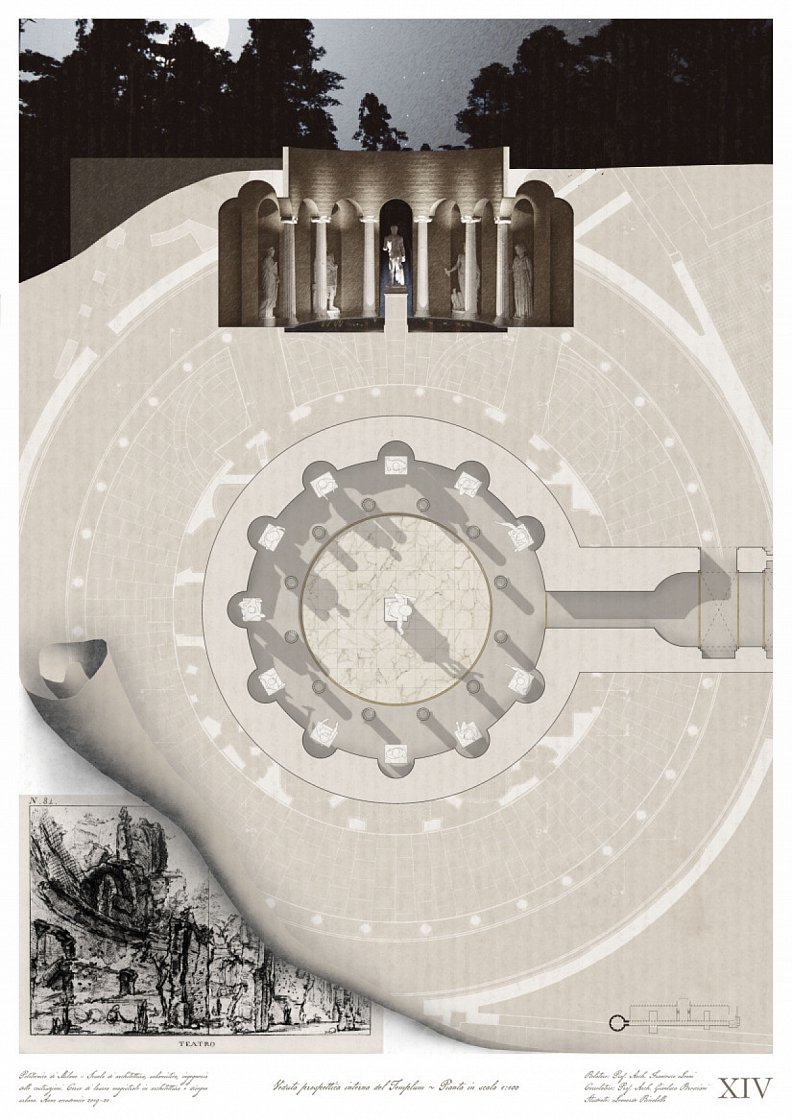